No talks with India without Kashmir on agenda: Pakistan

The United States on Tuesday called on India and Pakistan to re-engage in serious dialogue, saying both the countries needed to overcome historical mistrust. 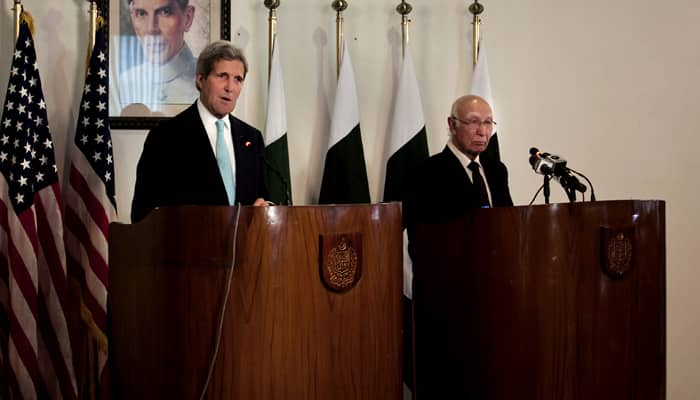 Islamabad: The United States on Tuesday called on India and Pakistan to re-engage in serious dialogue, saying both the countries needed to overcome historical mistrust.

Addressing a joint press conference with Sartaj Aziz, adviser to Pakistan Prime Minister Nawaz Sharif on national security and foreign affairs, visiting US Secretary of State John Kerry said he has asked the Pakistani PM to work with India to establish peace.

Aziz, however, ruled out any dialogue with India if Kashmir issue was not part of the agenda.

Aziz said that the cancellation of last year's scheduled talks over meeting with Kashmiri leaders shows that India was not interested to talk on this issue.

"Pakistan will not start talks with India without Kashmir," he said.

Meanwhile, while underlining that the US will continue to support the people of Pakistan in their fight against terrorism, Kerry said that terror groups operating from Pakistani soil continue to remain a threat for its neighbours.

“Terror groups like the Pakistani and Afghan Taliban and Lashkar-e-Toiba continue to pose a threat not just to Pakistan and its neighbours but also to the US,” said Kerry, who travelled to Pakistan after paying a visit to India.

He said the US has told Pakistan in clear terms that it needed to target all terror groups in the country.

Sartaz Aziz, on his part, stressed that his government, following the Peshawar Army school attack, has announced that action will be taken without discrimination against terror groups.

Responding to a question on the Afghan-Pakistan terror equation, Kerry said, “Clearly there have been sanctuaries and these sanctuaries have existed over the years. We have been talking to Pakistan on this issue. The government here has now refocussed its energies on these.”