The Taj Mahal will be shut for the general public and the Yamuna Expressway may remain briefly closed for normal traffic, which may be used as a back up route for US President Barack Obama, who will be visiting the 'monument of love' on January 27, officials said on Monday. 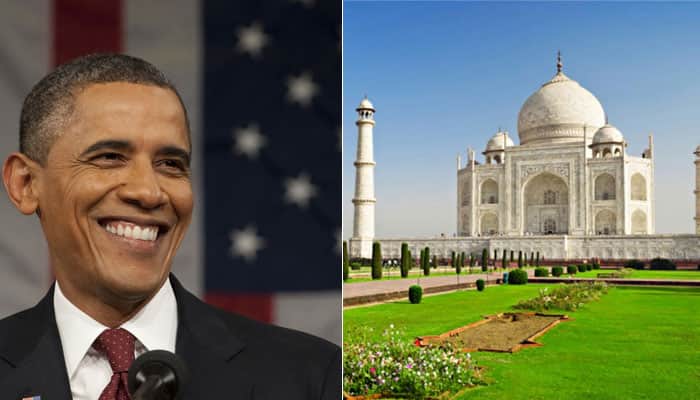 New Delhi: The Taj Mahal will be shut for the general public and the Yamuna Expressway may remain briefly closed for normal traffic, which may be used as a back up route for US President Barack Obama, who will be visiting the 'monument of love' on January 27, officials said on Monday.

Government sources today said heavy security forces have been deployed in the city adding that extra CCTVs have also been installed, a special control room has been set up and more CISF personnel will be deployed in Agra for Obama's visit.

The sources further said that although Obama is slated to travel to Agra by air, the six-lane 165 km-long Agra Expressway may be shut down for commoners as part of contingency plans in case the air route cannot be used. Commercial flight frequency to Agra will also be curtailed during the US President's visit, PTI reported.

"If the flight option fails, then a contingency plan of a road route will be there whereby whichever road is identified will be stopped for traffic for a few hours before the dignitary takes the route," sources said indicating security establishment's preference for Yamuna Expressway in such an eventuality.

Such contingency plan is readied whenever a highly protected head of state visits India, the sources added.

Although the sources did not give specific details, authorities may be keeping in the mind the fact that dense fog has been preventing flight operations in the mornings. The Yamuna Expressway is a controlled-access route.

The security has also been enhanced following a letter threatening a terror attack "somewhere" on the Yamuna Expressway, which connects Delhi with Agra.

Seventy-five anti-terror squad (ATS) personnel will be deployed on the outer periphery of the security ring protecting the US President, sources said, while adding that the internatl security of Obama will be taken care by special forces, specially requisitioned from Delhi and the inner most ring would be of special secret service agents from the United States.

Many hotels in the Canttonment area are also being booked for advance teams of the Secret Service.

The US President is arriving here on January 25 on a three-day visit during which he will hold talks with Prime Minister Narendra Modi, attend the Republic Day Parade as chief guest and visit Taj Mahal.