Osama bin Laden in a 1993 speech invoked apostle of peace Mahatma Gandhi as he asked his supporters to boycott American goods and seek inspiration from the Indian leader's struggle against the British, according to audio tapes of the slain al Qaeda chief. 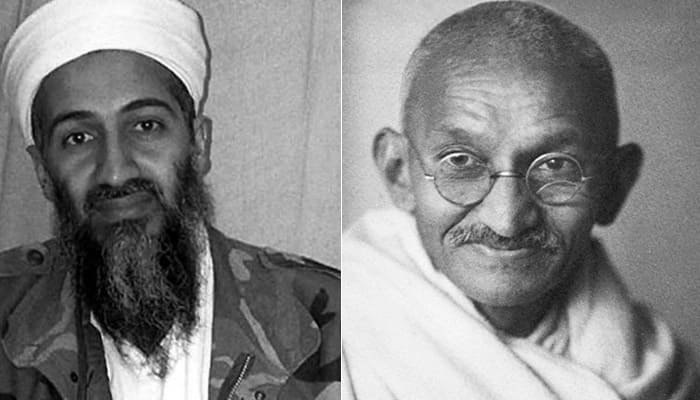 London: Osama bin Laden in a 1993 speech invoked apostle of peace Mahatma Gandhi as he asked his supporters to boycott American goods and seek inspiration from the Indian leader's struggle against the British, according to audio tapes of the slain al Qaeda chief.

After the US invasion of Afghanistan in 2001, Osama Bin Laden was forced to flee the city of Kandahar, where he had been based since 1997. Several compounds were hastily vacated, including one opposite the Taliban foreign ministry inside which 1,500 cassettes were discovered.

The cache soon passed many hands from an Afghan family to a cassette shop and then to a CNN cameraman, finally making its way to the Afghan Media Project at Williams College in Massachusetts, who asked Flagg Miller -- an expert in Arabic literature and culture from the University of California, Davis -- to unravel them, BBC reported.

More than a decade on, Miller has written a book about his findings, titled 'The Audacious Ascetic', which explores this unique collection. The tapes date back to the late 1960s through to 2001 and feature more than 200 different speakers -- Osama among them.

He is first heard in a tape from 1987 -- a recording of a battle between Afghan-Arab 'mujahideen' and Soviet Spetsnaz commandos.

An unexpected name to make an appearance in the tapes is Mahatma Gandhi, who is cited as an inspiration by Osama in a speech made in September 1993, the report says.

This is also the first speech in the collection in which Osama calls on supporters to take action against the US by boycotting its goods.

"Consider the case of Great Britain, an empire so vast that some say the sun never set on it," says Bin Laden.

"Britain was forced to withdraw from one of its largest colonies when Gandhi the Hindu declared a boycott against their goods. We must do the same thing today with America," he says.

Osama makes no mention of violence till 1996, according to the tapes.

"That changes in 1996, days after he is exiled from Sudan," Miller is quoted as saying.

It is only in one of the final recordings found in the collection that there is any allusion to 9/11. It is found in a recording of the wedding of Osama 's bodyguard, Umar, which was taped a few months before the attacks on New York City and Washington DC.

"He talks explicitly about 'a plan' -- he doesn't reveal details -- and how we are 'about to hear news' and he asks God to 'grant our brothers success'," says Miller.

"I understand that to signify the 9/11 attacks (because) he is talking specifically about the United States at that juncture," he says.

Osama was killed in Abbottabad, Pakistan, on May 2, 2011, in a US Navy SEALS raid on his compound.