Asserting that Pakistan has been given a "befitting" reply for violating ceasefire, Union Home Minister Rajnath Singh on Friday said Islamabad would not dare to disturb peace at the border anytime soon. 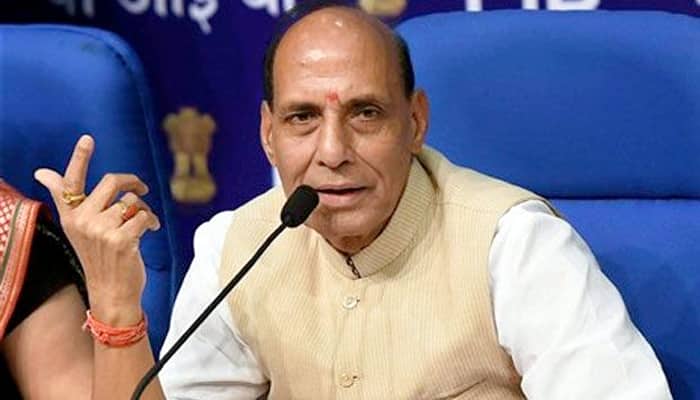 Bhopal: Asserting that Pakistan has been given a "befitting" reply for violating ceasefire, Union Home Minister Rajnath Singh on Friday said Islamabad would not dare to disturb peace at the border anytime soon.

He said Pakistan has been given adequate response for recent transgressions along the LoC and International Border under the new leadership, which is strong and courageous.

"We don't want peace at the cost of our honour," he said, apparently referring to weak response shown by the earlier Congress-led Government on the issue of ceasefire violations by the neighbouring country.

Pakistani forces had killed five persons in firing and shelling on the border, the Home Minister said.

"I raised the issue with the concerned Director General and asked what was happening on the border. He said we have shown them white flags as per our policy 16 times. I told him, you will not show the flag the 17th time. Following this, our forces gave a befitting reply to them," Singh maintained.

As a result Pakistan rushed to the United Nations with a demand that India should immediately hold talks with it on the ceasefire issue, he said.

Singh said India's long-standing diplomatic policy has been to have peaceful relations with all its neighbours. "But if someone provokes us again and again, then there is a limit to tolerate that."

Ever since Prime Minister Narendra Modi took charge in May-end, India's standing at the international level has improved, he said.

Referring to the Modi Government's "Make In India" push, Singh said in future the country would meet a large part of its defence requirement locally by setting up manufacturing units with the help of technology transfer.

The way BJP-ruled Madhya Pradesh has progressed in all spheres, it has become a "model state" for the entire country, he added.