A five-member Joint Investigation Team (JIT) from Pakistan, that included an ISI official, reached India on Sunday to carry out a probe into the attack at the IAF base at Pathankot. 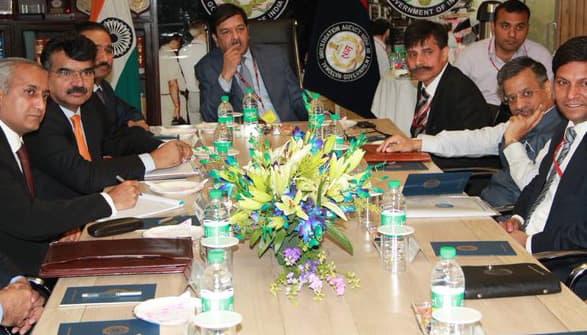 Delhi: India will ask for voice samples of JeM founder and chief, Maulana Masood Azhar, from Pakistan regarding Pathankot terror attack, as per reports on Monday.

National Investigation Agency (NIA) sources have said that they have got enough evidence against Azhar.

Moments before the attack Azhar was reportedly in touch with his brother Rauf Asgar, the 'supreme commander' of JeM.

And Rauf Asgar was in turn touch with their key planner and handler Kashif Jaan.

NIA have got evidence and intercepts of the conversations between the slain terrorists and their JeM bosses, sources further told Zee Media.

NIA sources added that in 90 percent of the conversations, Kashif Jaan was talking to  terrorists from Bahawalpur in Pakistan and was almost dictating to them how the plan was to be executed.

At the same time, JeM bosses including Kashif Jaan had escorted the terrorists till the point of infiltration from Pakistani side, said NIA sources.

A five-member Joint Investigation Team (JIT) from Pakistan, that included an ISI official, reached India yesterday to carry out a probe into the attack at the IAF base at Pathankot marking the first-ever such visit to the country to probe a terror case.

It will also analyse investigations being carried out by the NIA so far.

The team was received by officials of the NIA and Pakistan High Commission.

It will visit Pathankot tomorrow.