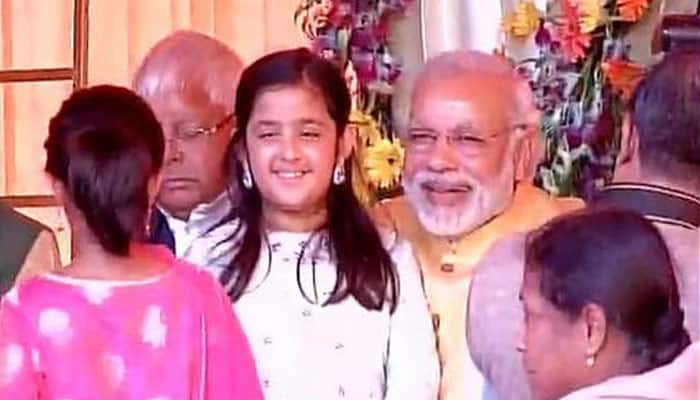 A staggering 1,00,000 invites have been sent out for the 'tilak' ceremony of Tej Pratap Singh Yadav, Lok Sabha member from Mainpuri, who will marry Raj Laxmi, the youngest daughter of former Bihar chief ministers Lalu Prasad Yadav and Rabri Devi, on February 26 in New Delhi.

Modi, who reached the venue at 10.45 am along with Uttar Pradesh Governor Ram Naik, was received by Lalu and Mulayam. Tej Pratap said no politics should be seen in the Prime Minister's visit. 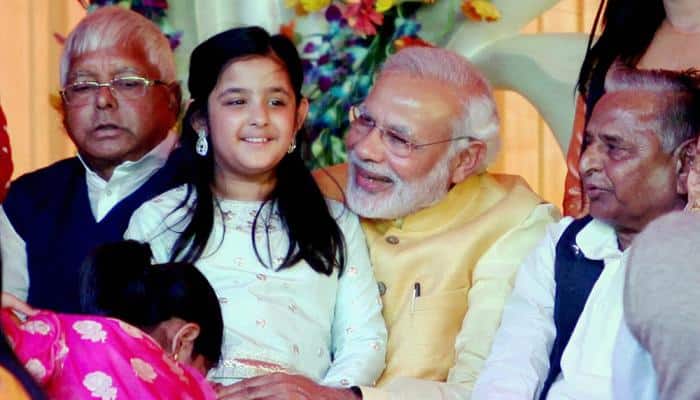 "There is no politics in his visit. He was extended an invitation. We are grateful to him for visiting us and give his blessings. The opposition to him is issue based and not the personal," he said.

Mulayam and Lalu have criticised Modi many times in the past but all was forgotten together with the three leaders happily posing for pictures and shaking hands.

The Prime Minister, who was seated between Lalu and Mulayam posed with family members including children of UP Chief Minister Akhilesh Yadav and showered flower petals on the bridegroom.

Modi left the venue after spending 45 minutes at the ceremony.

Mega Bollywood star Amitabh Bachchan had some trouble as his plane was not allowed by the security agencies to land at the Saifai air strip.

His private air plane was diverted to Lucknow from where he later took a chopper to reach the native village of the Yadavs.

A beaming Lalu said, "I am happy that my daughter`s marriage is a much talked about affair in the entire country. Mulayam Singh has not demanded single paisa (dowry) for the marriage as our hearts have met."

Also flying down to Saifai today are a string of Bollywood stars, singers, politicians, state and union cabinet ministers, chief ministers of other states and bureaucrats.

Family sources told a news agency that more than 100,000 invites have been sent to relatives, politicians, village folk, journalists, judges and celebrities from other fields.

Pakistani singer Adnan Sami, who recently participated in the Saifai Mahotsava, will croon this time too.

Special chefs camped in the native village of the Yadavs, offering mouth watering dishes which includes Gujarati food, traditional UP and Bihari food and also cuisine tailormade for the Bollywood stars.

Arrangements have been made for over 3,000 VIPs including SP ministers and MLAs and multiple giant kitchens have been set up to cook food for them. For convenience of those attending the ceremony, 500 luxurious Swiss cottages have been erected.

At the main venue, 10 giant LED screens have been put up for live coverage of the 'tilak'.

A special band from Varanasi, which performed earlier at Chief Minister Akhilesh Yadav and MP Dharmendra Yadav's wedding was an attraction of the ceremony. The band prepared a special tune for the ceremony.

A grand pandal bearing a festive look with a decked up stage was set up where Lalu performed the tilak.

Mulayam, his brother and state minister Shivpal Singh Yadav and nephew Dharmendra Yadav personally oversaw the preparations for the ceremony

Officials, both administrative and police, including those from Kanpur Zone under which Etawah falls, have been zipping up and down the roads leading to the venue to ensure there are no glitches.

A massive deployment of security personnel including 8 SPs, 15 ASPs, 35 DySPs, 61 policemen in-charge of police stations, 11 companies of PAC and 2 RAF, 300 sub-inspectors, 1,400 constables among others have been assigned the task of security, smooth traffic movement and parking of vehicles among others.