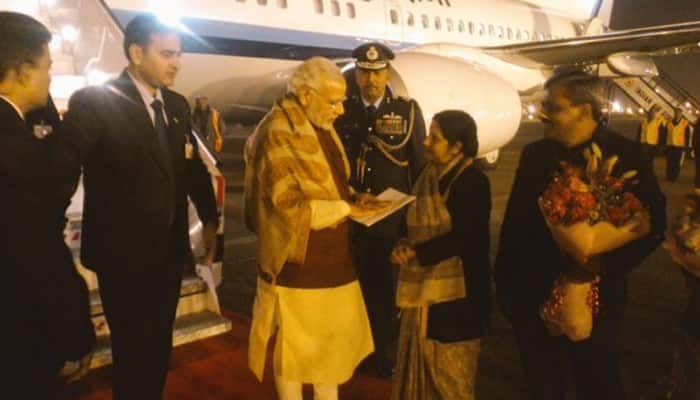 New Delhi/Lahore: Indian Prime Minister Narendra Modi on Friday night reached Delhi from his three-nation visit which took him to Russia, Afghanistan and a surprise stop-over in Lahore to greet his Pakistani counterpart Nawaz Sharif on his birthday. The two held talks at the Pak PM's home at Raiwind.

Breakfast in Kabul, tea in Lahore & dinner in Delhi! PM @narendramodi returns after a unique day in Indian diplomacy pic.twitter.com/yLRncn9DPU

During his two-day visit to Russia, Modi held talks with President Vladimir Putin, covering a wide range of sectors which included defence and nuclear cooperation.

In the second of his tour, Modi made a day-long unannounced visit to Afghanistan, where he inaugurated the new building of the Afghan Parliament in Kabul built by India at a cost of USD 90 million in the presence of Afghan President Ashraf Ghani. He also addressed the Afghan Parliament.

Modi's 150-minute visit to Pakistan was first by an Indian Prime Minsiter in nearly 12 years.

In Pakistan, he held talks with Sharif during which they decided to open ways for peace for the "larger good" of the people of the two countries.

Infusing a positive spirit in the neighborhood. PM @narendramodi departs from Pakistan after a few hours in Lahore pic.twitter.com/Fdo22pM0E2

After blessing the bride, PM departs Raiwind accompanied by PM Sharif who will see him off pic.twitter.com/wz9qVtN3Di

According to media reports, Nawaz Sharif was present at the Lahore airport when PM Narendra Modi's flight was taking off from here.

"They agreed to continue and enhance bilateral contacts and work together," he added.

In developments that took most people by surprise, PM Narendra Modi flew into Lahore today evening and met Nawaz Sharif while returning home from Kabul.

After Sharif and Modi hugged at the Allama Iqbal International Airport as he landed in an Indian Air Force plane, the two took a helicopter to Sharif's residence at Raiwind, about 40 km from here, officials here said.

The dramatic visit took place after Modi greeted Sharif on his birthday over telephone from Kabul earlier on Friday and expressed a desire to meet the Pakistani leader, Pakistani media said.

Geo TV reported that the visit "was not that surprising" as the Lahore Air Traffic Control had been told about it on Thursday.

But few in India and Pakistan knew about the programme, which came at a time when bilateral relations have shown definite improvement after months of tensions and border clashes.

Sharif and his brother and Punjab Chief Minister Shahbaz Sharif were among those who received Modi at the airport with bouquets. Also present were Pakistan Finance Minister Ishaq Dar and the Indian envoy, TCA Raghavan.

After pleasantries and a guard of honour by the Pakistani Air Force for Modi, the two prime ministers boarded a helicopter and reached Sharif's ancestral residence at Raiwind.

PM Narendra Modi's favourite dish 'Saag' was among other vegetarian delicacies prepared for him during a lunch-cum-dinner at Jati Umrah residence of his Pakistani counterpart Nawaz Sharif.

"All dishes, including Saag, daal and vegetable food, were cooked in desi ghee," PTI quoted a source in the Jati Umra as saying.

Kashmiri tea was also presented to the Indian premier. Some 11 members of Modi's delegation accompanied him to the Jati Umerah who were issued a 72-hour visa.

However, over 100 other members of the delegations stayed at the Allama Iqbal International Airport. There were refreshments at the airport for them.

When Modi reached at Jati Umrah Raiwind residence, located on the outskirts of Lahore, Sharif's son Hasan and other family members received him warmly.

The source said Sharif's mother also entered the hall where both premiers were holding the meeting along with his other family members.

Prime Minister Modi today visited Lahore on his way back home in a surprise visit - the first trip to Pakistan by an Indian premier in more than 10 years.

Modi and Sharif had met at the Paris Climate Summit on November 30, laying the foundation for a resumption of the stalled bilateral dialogue.

Greater Noida Road Accident: An Over Speeding Scorpio Collided With A Tree In UP

India-Australia Military Exercise will run till 11 December in Rajasthan's Bikaner from today.

Dharam Yatra : Know how to worship different forms of God

Khabrein Khatakhat: FINAL ROUND of polygraph test will be done today in shraddha murder case