Rahul Gandhi was caught in US with drugs in 2001, Vajpayee got him released: Swamy

Extending support to Rajasthan Chief Minister Vasundhara Raje, who is embroiled in the Lalit Modi controversy, Bharatiya Janata Party leader Subramanian Swamy has asked the Congress to first look within before blaming others. 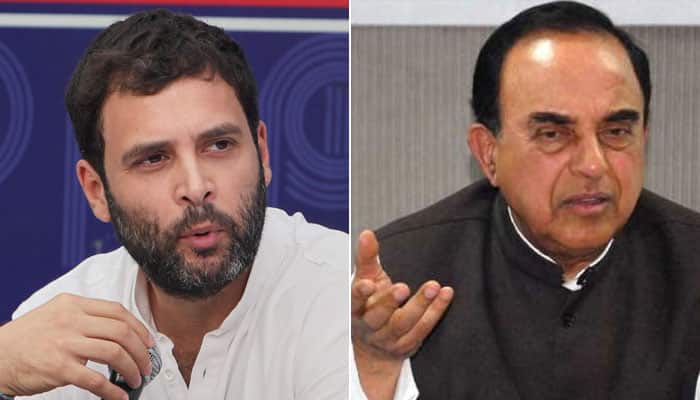 Jodhpur: Extending support to Rajasthan Chief Minister Vasundhara Raje, who is embroiled in the Lalit Modi controversy, Bharatiya Janata Party leader Subramanian Swamy has asked the Congress to first look within before blaming others.

In a controversial claim, Swamy had last week alleged that Congress vice president Rahul Gandhi was caught by Federal Bureau of Investigation officials for holding USD 1.60 lakh and white powder in the US in 2001.

Congress president Sonia Gandhi had then called up then Prime Minister Atal Bihari Vajpayee. It was Vajpayee who rang up then US President George Bush and got Rahul Gandhi released, a Hindi daily quoted Swamy as saying.

Swamy then called Raje 'Jhansi ki Rani', who is "capable of sailing through any controversy on her own".

"Raje is Jhansi ki Rani, who has the capability to protect herself from any odd and if the need arises, I would help her," he said, while comparing the minister to the popular freedom fighter.

Responding to questions on why no party leader has so far issued any statement in the Chief Minister's support like in the case of Foreign Minister Sushma Swaraj, who is also facing allegations pertaining to Lalit Modi, the leader said, "I know her (Raje). She is capable of protecting herself very well. She does not need the support of any party cadre.”

"What Raje did was just a small favour to an old friend on humanitarian ground, which was not a crime," he said.

When questioned about allegations on Jhalawar MP and Raje's son Dushyant Singh for illegal transactions, wherein an amount of over Rs 11 crores was allegedly transferred to the account of Niyant Heritage Hotels Pvt Ltd owned by him, Swamy challenged Congress to take a legal route and face the court.

"If Dushynat has done anything wrong, why did the Congress not go to the court against him and prove that he was guilty?" he asked.

Swamy was here to appear in the court to plead on the bail application of Asaram Bapu, jailed in a sexual assault case.

Plea to secure release of 7 Tamil fishermen held in Qatar