SC questions ban on women's entry in Sabarimala temple, asks if tradition is above Constitution

Taking a tough stand  the Supreme Court on Monday asked the lawyers representing Sabarimala Temple trust, whether any tradition can override constitutional provisions. 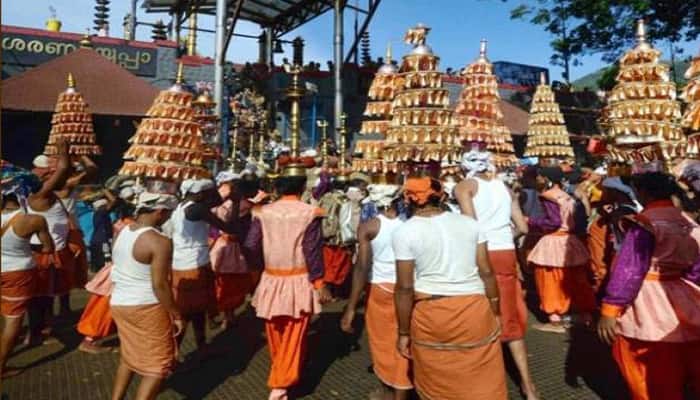 While examining the plea against ban on entry of of menstruating women into Kerala's Sabarimala temple, the apex court asked what right does the temple has to forbid women from worshipping deity at the temple premises.

The SC bench of Justice Dipak Misra, Justice Pinaki Chandra Ghose and Justice NV Ramana observed that the matter should be argued according to the Constitution.

The top court also said that mother is considered to be supreme in India, and 'Mata' has to be greeted first when she enters the room.

The court also asked whether women are allowed to pray in mosques alongside with men, or they are asked to present in a different room.

"We will now only be guided by the rationale under the Constitution. The gravity of this petition is that gender justice is endangered," a three-judge bench headed by Justice Dipak Misra said.

"Can you deny a woman her right to climb the Mount Everest? The reasons banning anything must be common for all and on the bedrock of the Constitution," the bench, also comprising justices V Gopala Gowda and Kurian Joseph, said.

The court was hearing a PIL, filed by Indian Young Lawyers' Association (IYLA), seeking entry of women in the Sabarimala temple.

At the outset of the two-hour-long hearing, it asked the counsel, supporting the ban, about constitutional principles which support the restraining order of the temple board.

"We will like to understand as to what right they have to forbid a woman from entering the temple, a public place," the bench said, visibly unimpressed with the arguments that the practice has been observed for centuries and much before the Constitution came into being.

The bench said it would examine the question as to whether a public religious place can pass such an order and "whether such a prohibition is permissible under the Constitution".

"Anyone can worship the God or Goddess structured into idols. I believe in God and want to bow my head, can you say, don't come," it asked the counsel representing the Devaswom Board.

Referring to the prevalent Hindu protocol, the bench said the mother has to be greeted ahead of father, 'Kul Guru' (teacher of the clan) and 'Kul Purohit' (priest of the clan) and hence, women should not be prohibited from entering the temples.

The Travancore Devaswom Board, which runs the historic temple, as a practice, does not allow girls after attaining puberty to enter the premises. However, women who have crossed menopause are allowed.

The court did not agree with the submission that majority of women feel that the prevalent practice is "good" and said, "we are not going by the majoritarian view" and "we will go by the constitutional principle".

Senior advocate Indira Jaising said she opposed the discrimination on the ground of gender and the Board cannot prevent the entry of women.
The court would resume hearing on April 20 on the plea.