Snowfall and rains occurred in several areas of north India including Himachal Pradesh and Uttarakhand, bringing down mercury on Sunday. 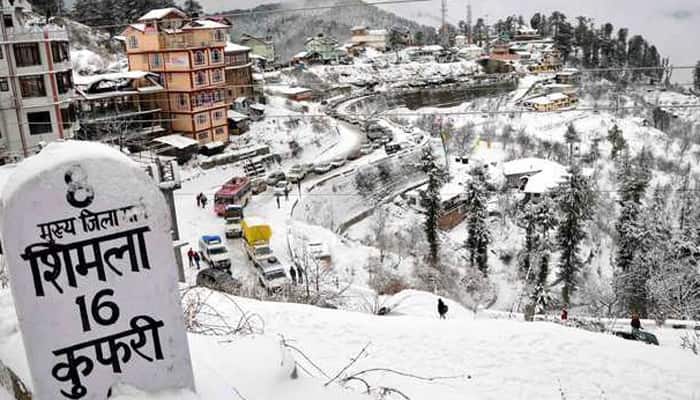 New Delhi: Snowfall and rains occurred in several areas of north India including Himachal Pradesh and Uttarakhand, bringing down mercury on Sunday.

Drizzle in some parts of the national capital led to a marginal fall in day temperature, making the conditions pleasant for Delhiites. Maximum temperature was 22.2 degrees Celsius, a notch below normal for this time of the year, while the minimum settled four points above normal at 13 degrees.

The city received 0.1 mm of rainfall through the day and there was mist in the morning.

Shimla and its surrounding areas experienced the first heavy snowfall of the season while tribal areas and other hills in Himachal Pradesh recorded continuous heavy snowfall.

The state capital was lashed by strong winds accompanied by showers this morning and heavy snowfall started in the town as the day advanced. Shimla town received 18 cm of snow while Kufri, Fagu, Narkanda, Kharapatthar Chopal, Haripurdhar and Nauradhar received 20 cm to 35 cm of snow.

The maximum temperature which had soared during past few days, plummeted and dropped by six to ten degree Celsius.

The high altitude tribal areas and other higher hills and mountain passes are experiencing continuous heavy snowfall and Rohtang, Kunzam, Chansel and Saach passes have received 40 cm to 50 cm of snow till noon while Churdhar ranges in Sirmaur and Dhauladhar ranges in Kangra recorded 45 cm of snow.

The Hindustan?Tibet National Highway was blocked beyond Shimla due to snow and hundreds of vehicles were stranded due?to traffic jams caused by snow.

The mid and lower hills had widespread rains and Dharamshala recorded 47 mm of rain till 8.30 AM while Chamba had 23 mm followed by Gaggal 19 mm, Jogindernagar 17 mm, Sarkaghat?15 mm, Manali 14 mm and?Baijnath 13 mm.

In Uttarrakhand, higher reaches including Badrinath, Kedarnath and Gangotri experienced snowfall while rain lashed Dehradun and other areas. Following incessant rain, the mercury in Dehradun dropped by about 10 notches from yesterday to settle at 9.5 degrees Celsius.

Meanwhile, a few areas in the higher reaches of Jammu and Kashmir received light snowfall even as there was improvement in night temperature across the Valley and Ladakh region.

Light snowfall and rains were experienced in a few areas along the Srinagar-Jammu National Highway, a Meteorological Department official said in Srinagar.

The mountainous belt of Bhadarwah in Doda district of Jammu and Kashmir witnessed the first snowfall of the season.

The snowfall brought cheer to farmers, especially fruit growers. "Snowfall is a boon for us... This first snowfall is more beneficial for almond, apple, pear and peach trees as it protects the trees from all sorts of diseases," said a fruit grower, Atta Mohd Sheikh of village Bharowa Bhaderwah.