The Supreme Court on Tuesday heard a curative petition by NGO Naz Foundation and decided to reopen a debate on Indian Penal Code's Section 377 that criminalises gay sex. 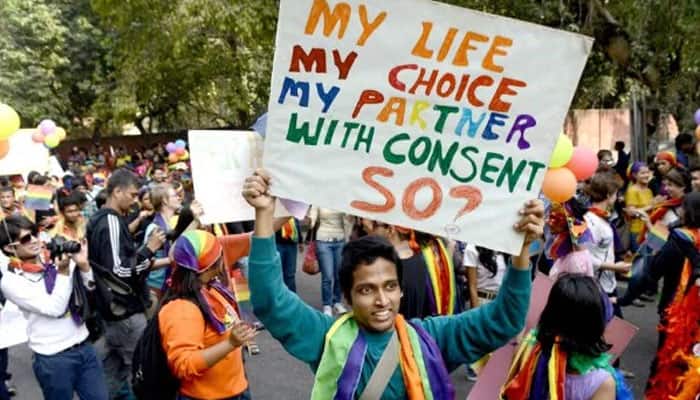 New Delhi: The Supreme Court on Tuesday referred a petition to make homosexuality legal to a five-judge bench.

A five-judge Constitution Bench of the Supreme Court will hear curative petitions seeking re-examination of its verdict criminalising sexual activity between same sex consenting adults under Section 377 of the Indian Penal Code.

The news has come as a ray of hope for the lesbian, gay, bisexual and transgender (LGBT) community.

A three-judge bench - comprising Chief Justice TS Thakur, Justices AR Dave and JS Khehar - said that since important issues concerning the Constitution were involved in the matter, it would be appropriate to refer the issue to a five-judge Constitution bench.

The bench said that the larger bench would be constituted in the future.

The bench was told there were eight curative petitions seeking re-examination of the order on the review petition and the December 11, 2013 judgement by which the Delhi High Court verdict de-criminalising section 377 (unnatural sexual offences) of the IPC was set aside.

The bench was also informed that the churches of northern India and All India Muslim Personal Law Board were against decriminalising homosexuality.

At the outset, senior counsel Kapil Sibal, arguing for decriminalising Section 377 of IPC, submitted that huge constitutional issues are involved in the matter. A battery of senior lawyers appeared in the case. He submitted the issue concerns the "most private and the most precious" part of life that is right to sexuality within the four corners of your domain which has been held as unconstitutional.

"By this judgement, you have bound the present and future generations to dignity and stigma," he submitted.

Further, he said that human sexuality should not be stigmatised.

Hearing his brief arguments, the bench said such an important issue needs to go to a Constitution Bench of five judges.

The bench was informed that the high court judgement was not challenged by the Centre which had left it for the apex court to take a call on the issue.

However, when the high court judgement was overturned by the Supreme Court, the Centre had preferred the review petition which was dismissed.

The bench was hearing the curative petition filed by gay rights activists and NGO Naz Foundation against the apex court's December 11, 2013 judgement upholding validity of Section 377 (unnatural sexual offences) of IPC and the January 2014 order by which it had dismissed a batch of review petitions.

A curative petition is the last judicial resort available for redressal of grievances in court which is normally decided by judges in-chamber. In rare cases, such petitions are given an open court hearing.

The petitioners, including the NGO, which has been spearheading the legal battle on behalf of lesbian, gay, bisexual and transgender (LGBT) community, had contended that there was an error in the judgement delivered on December 11, 2013 as it was based on an old law.

The apex court had earlier dismissed a batch of review petitions filed by the Centre and gay rights activists against its December 2013 verdict declaring gay sex an offence with punishment up to life imprisonment.

While setting aside the July 2, 2009 verdict of the Delhi High Court, the apex court had held that Section 377 of IPC does not suffer from the vice of unconstitutionality and that the declaration made by the high court was legally unsustainable.