Backing Madhya Pradesh Chief Minister Shivraj Singh Chouhan's stand that only the courts can decided on a CBI probe into the Vyapam scam, Union Home Minister Rajnath Singh said it is for the Madhya Pradesh High Court and the Supreme Court to decide on the matter. 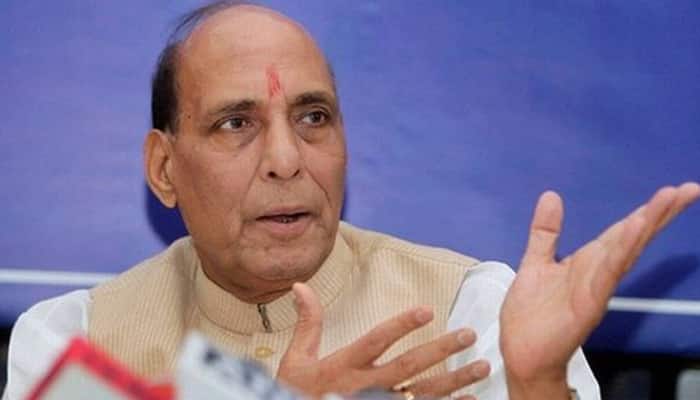 New Delhi: Backing Madhya Pradesh Chief Minister Shivraj Singh Chouhan's stand that only the courts can decided on a CBI probe into the Vyapam scam, Union Home Minister Rajnath Singh on Monday said it is for the Madhya Pradesh High Court and the Supreme Court to decide on the matter.

“All cases related to Vyapam are not under the supervision of the state government but the High Court. It for the High Court to decide on a CBI enquiry into the case. Our political opponents are trying to turn a non-issue into an issue,” Singh said.

The Centre's support to the MP CM came on a day when Chouhan came under intense pressure to order a CBI probe after the Supreme Court agreed to hear a petition seeking removal of Madhya Pradesh Governor Ram Naresh Yadav on the ground of his alleged involvement in the scam.

The Chief Minister has been facing flak for not ordering a probe by the CBI into the case even after 45 persons linked to the Madhya Pradesh Vyavsayik Pareeksha Mandal (Vyapam) scandal have died, mostly under mysterious circumstances.

Yesterday, the CM held that the case is being probed by a Special Investigation Team (SIT) under the supervision of the Madhya Pradesh High Court and any further action can be taken only by the court.

"My government is not above the judiciary. When the High Court has refused a CBI enquiry into the matter, how can we order it?" the Chief Minister said.

He said a SIT is probing the scam under the supervision of the Madhya Pradesh High Court and if the court feels it should be investigated by any other agency, it is free to do that.

"The Supreme Court and the High Court are free to get the matter probed by the agency they want to. We don't have any problem."

The Vyapam scam had started out as just another case of systemic corruption that is part of everyday life in the country but now is being dubbed as one of the biggest scams in the country.

With three deaths in the last three days, the Vyapam scam has turned into a monster which Madhya Pradesh Chief Minister Shivraj Singh Chouhan can ignore at his own peril.

The latest in the series of deaths of people linked in one way or the other to the examination was that of a trainee woman cop on Monday. Anamika Khuswaha reportedly committed suicide by jumping into a river in Sagar, Madhya Pradesh.

“Anamika Kushwaha jumped into the river and died. It's said she was mentally stressed for the last few days,” said Savita Sohane of the Sagar Police Academy. Kushwaha had cleared the entrance exam held by Vyapam last year and joined the academy in February this year.

Responding to media queries on Khuswaha's death, the CM said that the unfortunate incident was not related to Vyapam scam investigation. “Every death should not be linked (to the scam),” he said.

On Sunday, Dr Arun Sharma, the dean of a Jabalpur Medical College, was found dead in a Delhi hotel.

Dr Sharma's death came exactly a year after his predecessor at Netaji Subhas Chandra Medical College, Dr DK Sakalle's body was found in a charred condition at his residence in Bhopal.

Media reports said that both Dr Sharma and Dr Sakalle were incharge of the document verification committee that was involved in checking the credentials of students suspected of having used unfair methods to clear Pre-Medical Test (PMT) and Pre-PG exams.

Commenting on the probe into Dr Sharma's death, Delhi Police Commissioner BS Bassi said, “We are carefully investigating the matter, no foul play was observed as per prima facie evidence.”

“Notwithstanding the fact no foul play was observed as per prima facie evidence,a medical board was constituted to conduct post mortem. We are also in touch with late Dr. Arun Sharma's family so we get to know about local factors that can give indication of foul play.”

Dr Sharma's death came less than 24 hours after television journalist Akshay Singh died minutes after he interviewed the family members of a student Namrata Domor in Jhabua. Domor's mutilated body was found on a railway track in Indore in 2012.

While there are no conclusive evidences of any foul play in their deaths, the series of unexplained deaths has reaffirmed the suspicion that attempts are being made to eliminate people linked to the scam.

The SIT has questioned thousands of people and arrested many but questions continue to remain on the effectiveness of the probe.

Those demanding CBI probe have raised serious questions on non-partiality of the SIT as it comprises of officers from the state police.

Stepping up its attack, Congress today demanded that the Supreme Court should take suo moto cognisance of the case and order a probe under its direct supervision.

"The Chief Minister cannot be spared. He should take responsibility," Chacko said.

Meanwhile, Vyapam scam whistleblower Ashish Chaturvedi has approached the police seeking enhanced security cover as he fears that he will be eliminated if he testifies in court in the case.

Many people related to the scam have died over the years but it seldom raised suspicion then as they were not in quick succession as they have been in the past few months. What is adding to the fear of a mischief is that the increase in deaths comes just ahead of July 15 when the SIT is to submit second chargesheet – which reportedly looks into the wider conspiracy behind the scam.

For Chouhan, who is into his third successive term as CM, the Vyapam scam is the biggest challenge to his track record of having put Madhya Pradesh on the fast lane of development.

With many high and mighty are said to be among the beneficiaries of the scam, Chouhan's resoluteness in getting to the bottom of the scam will be put to test like never before.

The nation is watching.