A trainee woman cop, recruited through Vyapam, reportedly committed suicide even as the mysterious deaths of people associated with the scam continued to rise on Monday. 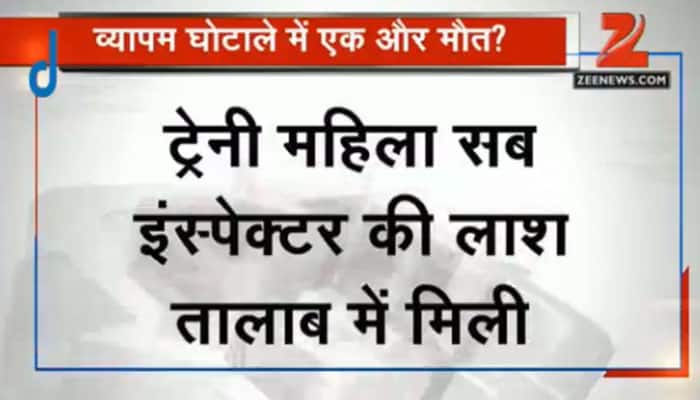 Bhopal: A trainee woman cop, recruited through Vyapam, reportedly committed suicide even as the mysterious deaths of people associated with the scam continued to rise on Monday.

The body of the 25-year-old resident of Morena district, Anamika Kushwaha, was recovered from a lake under mysterious circumstances where she is suspected to have jumped to death earlier today.

Recruited in February 2015 through an exam conducted by Vyapam, Anamika was married and staying in a hostel in the Sagar Police Academy in Madhya Pradesh.

Madhya Pradesh Chief Minister Shivraj Singh Chouhan reportedly called the death 'unfortunate' and said that every death should not be linked to Vyapam scam.

“Anamika Kushwaha was mentally stressed from the past few days. She had appeared for the exam last year and joined the batch in February this year,” Savita Sohane, ASP, Sagar Academy was quoted by ANI.

Meanwhile, City Superintendent of Police (CSP) Gautam Solanki told PTI that her selection has nothing to do with Vyapam scam and she was not a suspected beneficiary.

Congress has been demanding a Central Bureau of Investigation (CBI) probe into the scam monitored by the Supreme Court.

This is the third death reported in the past three days related to the mysterious Vyapam scam.

Investigative journalist Akshay Singh had suddenly died on Saturday when he had gone to interview the family of a deceased Vyapam scam accused in Madhya Pradesh.

On Sunday, the body of dean of Jabalpur's NS Medical College, Arun Sharma, was found in a hotel near the Indira Gandhi International (IGI) Airport under mysterious circumstances.

The Special Investigating Team (SIT) probing the scandal had submitted to the MP High Court that 23 deceased in the MPPEB scam had died unnatural deaths so far.

The most high-profile death in connected with case has been that of Shailesh Yadav, son of Madhya Pradesh Governor Ram Naresh Yadav. Shailesh (50) was found dead at his father's residence in Mall Avenue area of Uttar Pradesh capital Lucknow on March 25, 2015.