Will wait for Modi govt's implementation on construction of Ram Temple in Ayodhya: RSS

The Rashtriya Swayamsewak Sangh said on Friday that even though Modi government is moving on right direction the RSS will keep a tab on it's implementation on construction of Ram Temple in Ayodhya. 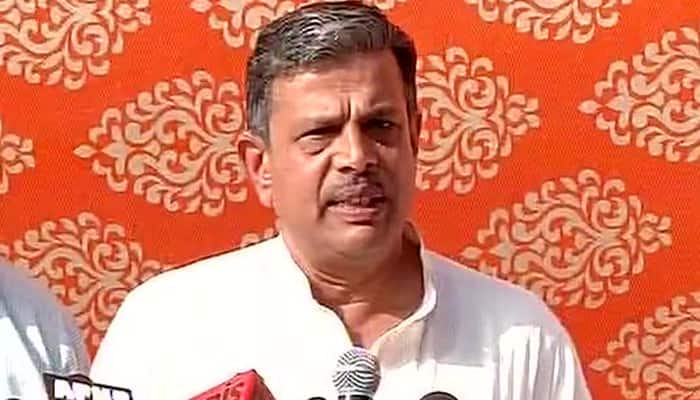 New Delhi: The Rashtriya Swayamsewak Sangh said on Friday that even though Modi government is moving on right direction the RSS will keep a tab on it's implementation on construction of Ram Temple in Ayodhya.

The announcement came after a three-day "coordination" meeting with the top brass of the government and the BJP leaders ended here. The Sangh further termed its coordination committee interaction with the BJP as 'an experience sharing meeting'.

The RSS today said that the Modi government was moving in the right direction with commitment and dedication and rejected criticism that it was acting like a "remote control".

"We have had discussions on many important issues in the last three days, discussed the internal and the external security of the nation," said senior RSS ideologue Dattatreya Hosabale.

"We discussed issues which are important for national security, alongwith issues affecting the nation," he added.

He further said that these discussions took place because the internal security of the nation was under threat. It was also felt that the government must focus on rural development.

He also stressed on the importance of addressing the inclusive development model, saying the models of growth of the West have failed, and the growth model for the country must be Indian.

While speaking on building of Ram Temple in Ayodhya, RSS said, “We will wait for Government's implementation according to their time table.”

Furthermore hitting out at the Congress, Hosabale said, "There cannot be 100 percent satisfaction for everyone but Government's achievements are many."

"Congress was under remote control, they need not talk about us," he said while adding that RSS is not Modi government's remote control.

"This was not a critical assessment of the government," he said. "Our people work on the ground, we came together to provide valuable and useful inputs to those in the government."

The Modi government, he further said, had done good things since taking power in May 2014 and it was progressing on the right track.

"The government`s direction is fine, so is its dedication and thinking," he added.

Hosabale, 59, who interacts closely with the BJP, said among the subjects that figured in the BJP-RSS discussions were cross-border terrorism, internal terrorism, better rural development, relations with neighbouring countries, and the country`s cultural heritage.

He said the Modi government had raised the aspirations and hopes of the people as never before and it had created a sense of confidence both within and outside the country.

"That is the most welcome thing" about the government, he said.

Earlier in the day, several top ministers of Modi government participated in the deliberations on some key issues including internal security, Naxal problem and situation in Jammu and Kashmir.

Rajnath Singh, Arun Jaitley, Sushma Swaraj, Manohar Parrikar, Venkaiah Naidu and Anant Kumar were among senior Union Ministers who attended the deliberations where they spoke about the measures taken by them in relation to the issues raised by the RSS and its affiliates.