Yadav, Bhushan expelled from AAP: As it happened 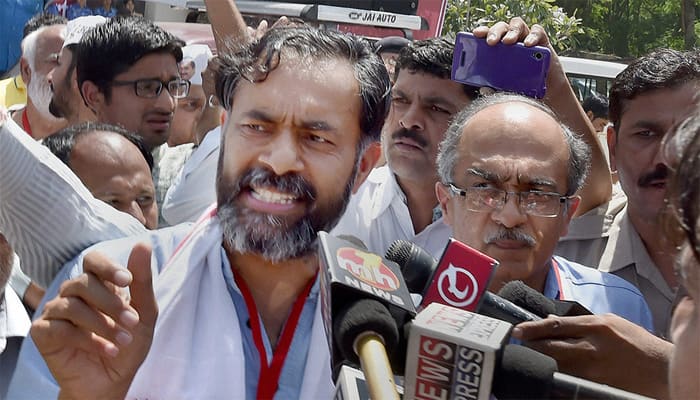 ​​Also Read: Anna Hazare refuses to get involved in AAP's internal dissent, says it's beyond his understanding

"First - AAP should be brought in the ambit of RTI voluntarily. Second - Current Lokpal of the party Admiral Ramdas should chair the meeting. Third - AAP should constitute a committee to work on the lines of Election Commission including the selection of candidates. Fourth - State-level decisions of the party should be left to state executive bodies. Fifth - Party should expand its wings in those state where election are going to be held in near future. Sixth - Voting right ought to be given to active volunteers also. Seventh - Amendments made in the constitution of the party on 2014 should be repealed," said an NC member urging not to mention his name.

However, the Kejriwal camp hit back claiming that "private" conversations of leaders were being "recorded" for the past nine months to "blackmail" the leadership.

The conversation purportedly took place between Kejriwal and one Umesh Singh, a party worker, in which the AAP chief loses his cool and tells the worker to better go and work with Yadav and Bhushan.

"You don't know how they (Yadav and Bhushan) were working against the party's interests during the elections....I am not here to be part of any brawl. I am contemplating starting a new party...Will leave AAP with 66 MLAs. Best wishes to you to work with Yadav and Bhushan.”

The duo claimed that Kejriwal even threatened to float a new regional party with all its MLAs as he "cannot work with us".

The Kejriwal camp strongly rebutted the allegations by the dissident duo and accused the two founding members of working to ensure party's defeat in the Delhi polls, saying they had links with AAP's breakaway faction AVAM which had alleged that the the party got "shady" funds of Rs 2 crore last year.