A photograph of Jammu and Kashmir Minister Chaudhary Lal Singh purportedly touching the collar of a woman doctor has gone viral on social media. 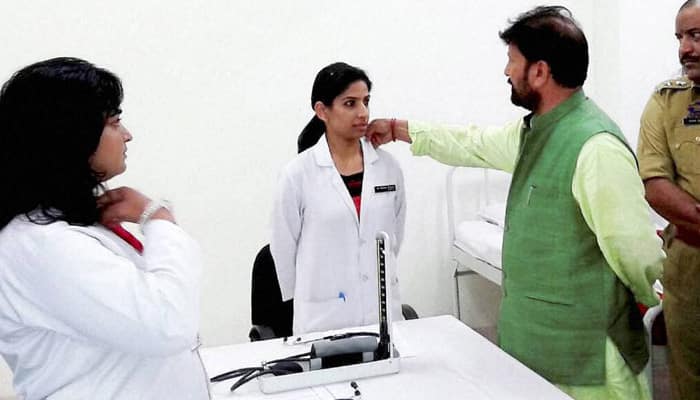 Jammu: A photograph of Jammu and Kashmir Minister Chaudhary Lal Singh purportedly touching the collar of a woman doctor has gone viral on social media.

The BJP leader, who is Minister for Health, had gone to the government hospital in Lakhanpur to check preparedness ahead of the start of Amarnath yatra.

In the hospital, he found that the collar of the doctor was not in proper place and corrected its posture.

"Minister moved to female doctor asked her... Bitya your collar is not proper and corrected it with his hand. There was no protest by the female doctor," a senior officer witness to the whole episode, said.

If fact, other woman doctor watching the Minister correcting the collar of the doctor, herself took lesson for it and placed her collar in proper place, the officer said.

"There was a lot of public. I do not think he inappropriately touched the woman doctor at a government hospital," he said.

The Minister was accompanied by the Secretary Health and Medical Education Department, Dr Mandeep Bhandari and SP Kathua Nasir Khan.

In February this year, Singh was accused by a woman doctor of mental harassment after he rebuked her for not wearing the apron.