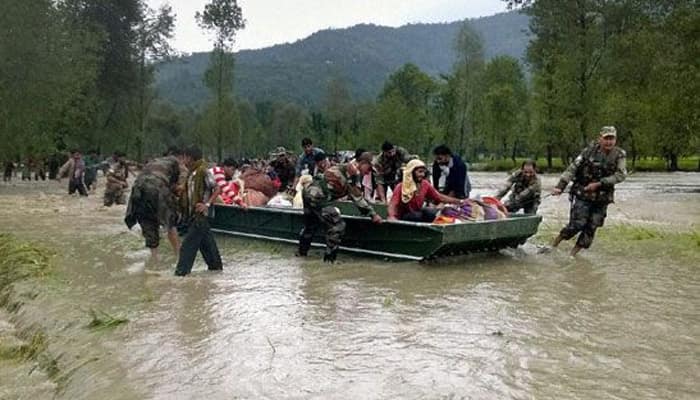 Srinagar: Over 1,42,000 people have been rescued from the flood-ravaged parts of Jammu and Kashmir so far, as the relief operations launched by the Armed forces entered the 12th day on Saturday.

"Armed Forces and NDRF have so far rescued over 1,42,000 persons from different parts of J&K in the ongoing rescue and relief operations," a defence spokesperson said here.

Thirteen tonnes of water purifying tablets and six water filtration plants with a capacity to filter 1.2 lakh bottles per day has already reached Srinagar, he said.

Suction pumps and other engineering equipment from Vishakhapatnam have also reached the flood affected area for relief work, he said, adding twelve sewage pumps from Delhi have also been dispatched to the Valley.

The spokesman said communication equipment of Department of Telecommunication, Army, BSNL and some private companies have also been dispatched to restore the network.

Also, thirty generator sets of 3 to 5 KVA capacity have been sent to Srinagar to provide continuous power supply in relief camps and field hospitals, he added.

Besides these, as many as 8,200 blankets and 1,119 tents have been provided to the flood victims, he said, adding, 80 medical teams of the Armed Forces Medical Services are already operating in full swing.

Four field hospitals have been established in Avantipur, Pattan, Anantnag and Old Airfield where medical aid is being provided to the ailing people, he said, adding that till now, they have treated more than 22,500 patients.

Military medical services from Bathinda have also been shifted to Srinagar, he said, adding that about 10 tonnes of medicines and other health care materials, including mobile oxygen generation plant, have reached Srinagar from Delhi.

An Indian Air Force helicopter, which was involved in rescue operations in Srinagar was pelted with stones as it was carrying out rescue mission.

However, the NDA government led by Prime Minister Narendra Modi has decided to ignore such attempts by separatist elements to disrupt relief operations in the Kashmir Valley.

”We have closed our eyes. We are not looking towards them (separatists). We are determined to provide relief to people, no matter how difficult the situation is. The relief and rescue mission will continue,” Home Minister Rajnath Singh said.

The Centre has said that its main focus was on helping people to recover from the worst-ever floods in 109 years.

The Home Minister’s remarks came at the backdrop of reports that some separatists were trying to instigate people in the state to pelt stones at rescue teams.

Reports have been doing rounds that some separatist elements in the Valley were trying to spark violent protests and provoking people against the armed forces.

The forces working on the ground have been advised to mainly focus on humanitarian work and take precautionary measures so that situation doesn't go out of control.

Meanwhile, 43 people have been found dead in the Kashmir Valley as the flood waters receded in J&K, authorities said on Saturday.

An article published in ANI website says: One wonders where the inestimable Syed Ali Shah Geelani and his gang of so-called separatist leaders have disappeared. Are they not self-proclaimed true voices of Kashmir? Are they not the torch bearers of the Kashmiri struggle and custodians of Kashmiriyat? Why are they silent today? Why are they not out in the streets with their cadre supervising relief work, or at least standing by with those who follow them in their incessant stone pelting?

The Omar Abdullah government has been at the receiving end for slow rescue efforts. The locals have heavily criticised the state government and have praised the armed forces which are relentlessly carrying out the rescue operations.

Army Chief General Dalbir Singh Suhag is himself overseeing the relief work and has assured the nation that the soldiers will not return to the barracks until every person is rescued in the flood-hit state.