Have to overthrow govt of father-son duo: PM Modi to Jharkhand voters

Prime Minister Narendra Modi on Monday slammed the father-son duo of Shibu Soren and Hemant, calling on the voters in Jharkhand to overthrow their government. 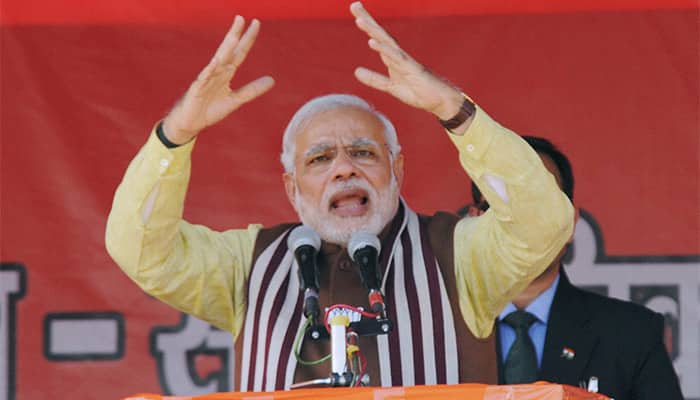 Dumka (Jharkhand): Prime Minister Narendra Modi on Monday slammed the father-son duo of Shibu Soren and Hemant, calling on the voters in Jharkhand to overthrow their government.

Addressing a rally here, Modi said only Chief Minister Hemant Soren and his father and former CM Shibu Soren have benefitted from the government in Jharkhand, not the people of the state.

“This loot needs to end,” he said further.

“The way a mother doesn't give sweets to a child who has done something wrong, do not give another chance to the people who have wronged you,” Modi said, referring to the father-son duo.

“If you do they will only wrong you more; instead punish them and they might learn a lesson,” he added.

The voting percentage in four phases has shown BJP will win the elections. Now, your job in fifth phase is to give us two-third majority and help us overthrow the government of father-son duo.

“Put a finger on AK-47 you take someone's life; put it on an EVM you can change someone's life,” he said, adding, “We want to take Jharkhand to new heights.”

“This election lays the foundation of Jharkhand for the next 100 years.”

Noting that the coal available in Jharkhand, the most resource-rich state of India, can light up the entire country, Modi said despite this the state itself was in darkness.

Referring to the tribal communities, Modi said their development will lead to the development of the nation.

“Congress doesn't even know the magnitude of tribal people who stay in the nation. They never thought of working for them,” Modi said further, hitting out at the opposition party.

“Congress holds a meeting every evening and thinks about what lies to spread, how to mislead the voters,” the BJP leader said further.