After Pinarayi Vijayan's selections as CM, VS Achuthanandan to continue as 'sentinel' of people of Kerala

There were reports that CPI-M veteran VS Achuthanandan was unhappy at not being anointed as Chief Minister of Kerala. 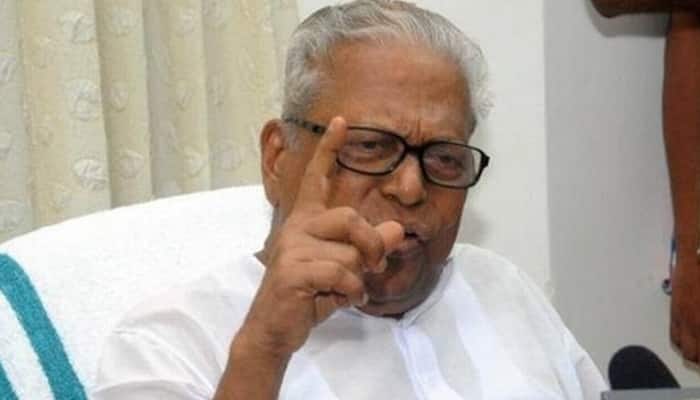 Thiruvananthapuram: CPI-M veteran VS Achuthanandan on Saturday said he would continue to play the role of a "sentinel" of the people of Kerala, a day after the party unanimously nominated Pinarayi Vijayan over him for the chief minister's post.

Achuthanandan, who called a press meet this morning to announce that he was stepping down as the Opposition leader, refused to be drawn into any matters relating to the selection of party politburo member Vijayan as the new LDF chief minister.

"I will continue as a sentinel of the people of Kerala by upholding the spirit of the Left and taking up people's issues," 92-year-old Achuthanandan, a tireless fighter against corruption and corrective force within the party, told reporters shortly after the Chief Minister-designate made a courtesy call on him at his residence.

Achuthanandan, who was the LDF's face in the campaign during the May 16 Assembly polls, evaded questions on whether he was sidelined.

"This is not the time for any such questions. I have called you (media) as I am formally demitting the office as Opposition leader and to thank you for all the support you have given to me," he said.

Asked about reports that he would be given some top post, he replied, "You know that I don't expect such things."

The CPI(M) veteran said the people of Kerala expect LDF to bring out the truth behind the various scams of the previous Congress-led UDF government.

"People also believe that the new LDF government will put behind bars those involved in the murder of Dalit law student at Perumbavoor in Kochi recently," Achuthanandan said.

He said the people expect the LDF government to complete the state's dream projects like Kochi Metro, Kannur International Airport and SmartCity IT in a time-bound manner.

The nonagenarian said he will be very much in the state capital when asked if he would be shifting to his home town in Alapuzha.

There were reports that Achuthanandan was unhappy at not being anointed as Chief Minister after being instrumental in giving the front such a resounding victory.

He was elected from Malampuzha constituency in Palakkad by a margin of 27,142 votes.

LDF secured 91 seats and Congress-led UDF 47 in the 140 member-assembly, while BJP bagged a single seat in the May 16 Assembly polls.