The Madhya Pradesh government on Monday decided to set up a Special Investigation Team (SIT) to probe the alleged killing of a police constable by the sand mining mafia. 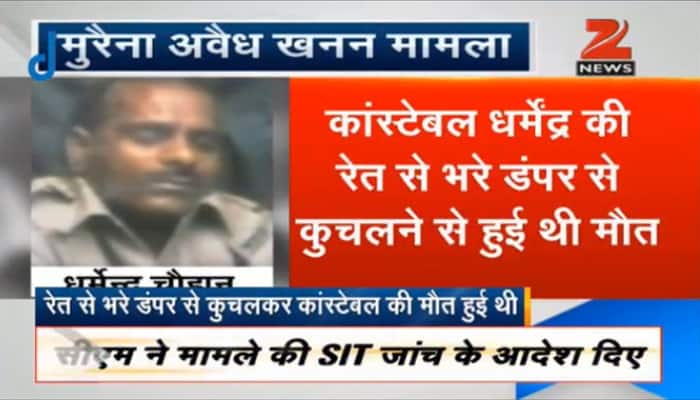 Bhopal: The Madhya Pradesh government on Monday decided to set up a Special Investigation Team (SIT) to probe the alleged killing of a police constable by the sand mining mafia.

State Chief Minister Shivraj Singh Chouhan said that the SIT will be formed today itself and will submit its report within 15 days.

Constable Dharmendra Chouhan was mowed down allegedly by the sand mafia when he tried to stop a dumper carrying illegally mined sand from Chambal River near a village in Morena in the wee hours on Sunday.

“I had called a high-level meeting this morning over Morena incident in which a brave policeman has lost his life,” Chouhan said.

“We have decided to form an SIT for investigation of this matter,” the CM said, adding “the state government will provide the family of the martyred constable salary for the remaining years of his service.”

A compensation of Rs 10 lakh will also be provided to the kin of the victim.

Apart from this, Rs 1 lakh will be given to the family of the martyred policeman from Shaheed fund and his children will be given free education.

Constable Dharmendra Chouhan had gone to Louhgarh village under Noorabad police station limits along with a team late Saturday night following a tip-off that some persons involved in a loot incident were hiding there. He spotted a dumper parked on a roadside there and decided to check it past midnight.

The driver upon seeing police tried to escape from the spot along with the dumper loaded with illegally mined sand.

But, the 40-year-old constable, posted at Noorabad police station, clung onto its door on the driver's side and tried to pull him down.

The driver then started reversing the dumper at a great speed and turned it towards the driving side. As a result, the vehicle fell into a ditch and overturned trapping the constable under it resulting in his death. The dumper driver fled from the spot soon after the incident.

A manhunt is underway for the yet-unidentified driver, police said.\