BJP's 44-year-old Maharashtra unit chief Devendra Gangadhar Fadnavis was on Tuesday unanimously chosen as the BJP legislative party leader paving way for him to take over as the new chief minister of Maharashtra. 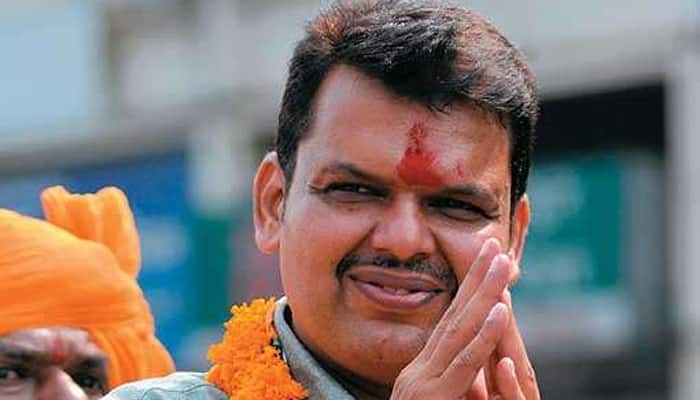 Mumbai: BJP's 44-year-old Maharashtra unit chief Devendra Gangadhar Fadnavis was on Tuesday unanimously chosen as the BJP legislative party leader paving way for him to take over as the new chief minister of Maharashtra.

With the BJP MLAs formally electing Devendra Fadnavis as their new leader, the party's first ever Maharashtra chief minister and a "mini-cabinet" of six to nine ministers, all from the BJP, will now reportedly take oath at Mumbai's iconic Wankhede stadium where India won the Cricket World Cup in 2011.

Prime Minister Narendra Modi is also likely to attend the ceremony. A cabinet expansion will happen later depending on how alliance talks with the Shiv Sena go.

A delegation of BJP MLAs led by Fadnavis will now meet the Governor of Maharashtra around 6 pm and stake claim to form the new government in the state, Rudy told reporters.

After former BJP chief and Union Minister Nitin Gadkari made it clear that he was not in the CM race and did not wish to return to state politics, Fadnavis, who successfully led the party's election campaign, was leading the race for the chief minister's job.

Interestingly, senior BJP Maharashtra leader Eknath Khadse had claimed this morning that he is still not out of the race for the chief minister's post. Khadse, however, said that he will abide by any decision taken by party's central leadership.

The election of the Legislature Party leader marks a step towards formation of the government in the state where BJP fell short of majority by 22 seats in the 288-member Assembly.

As the BJP moved ahead with the process of forming its first-ever government in the state, a visibly cornered Shiv Sena softened its stance on the issue and made last-ditch efforts to patch up with its estranged ally.

Two senior Sena leaders Subhash Desai and Anil Desai yesterday met Union Petroleum Minister Dharmendra Pradhan, who has been authorized by BJP president Amit Shah to talk to the estranged ally. Late in the evening, senior BJP leader Vinod Tawde met Shah to apprise him of the State BJP’s views on getting the Sena aboard.

Giving enough indications that the party has softened its stance an editorial in its mouthpiece “Saamana” said that Sena would support a BJP-led government as the latter had got a mandate.

"We will have to keep our political differences aside and work with the BJP chief minister for the unity of Maharashtra. We have kept ourselves together even in difficult circumstances and it will be better if it remains so," said the editorial in Saamana, which is regarded as the view of Sena chief Uddhav Thackeray.

BJP leaders have in past described Sena as their "natural" partner pointing out its member Ananth Geete remains a member of Union Cabinet.

Meanwhile, massive celebrations began in Fadnavis' native city Nagpur and BJP head office in Delhi minutes after he was elected as the BJP legislative party leader.

Maharashtra: BJP wants to make oath-taking by its CM a "historic" event