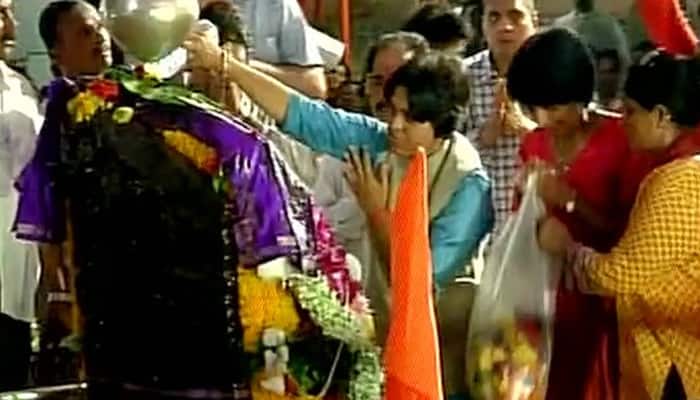 The development comes hours after two women, for the first time, offered their prayers at the inner sanctum of the temple, saying it was a historic day and would create an atmosphere of gender equality in the society.

Hailing it as a big victory for women, Desai said, "We have been demanding that powers granted by the Constitution should be given to us. There should be no discrimination at temples. Our fight was against wrong traditions and we won. It's a beginning."

"As we have won the fight, police too followed the high court's decision and escorted us to the temple. Besides, the temple trust has also taken a right decision today. They were wrong earlier, but I have no grudges against anyone," she said.

Talking to mediapersons after offering prayers with her supporters and cadre, she said, "We are happy that we have launched our agitation from Shani Shingnapur, and it succeeded. Earlier, the Maharashtra Government had taken a wrong decision. The Chief Minister was wrong, but now he has agreed and won't stop us from going to inner sanctum of the temple."

Buoyed by their success, Desai announced: "On April 13, we will launch an agitation along with 500 women at Kolhapur's Mahalaxmi temple, and thereafter we will go to Trimbakeshwar temple in Nashik."

Many women activists and worshipers thanked Bhumata Brigade chief Trupti Desai who fought for the same.

Earlier, speaking to an English news channel, Desai had said, "We will continue with our fight to allow women in other temples as well, we'll also be meeting PM Modi in this regard."

She had further said, "We will ask PM Narendra Modi to make sure that women are allowed in all temples without any issue."

Desai had been detained earlier on her way to the temple despite the court's orders that women have the right to worship anywhere they want.

The activists also welcomed the decision of the Shani Shingnapur temple authorities to allow females to enter the inner sanctum of the temple.

Bharatiya Janata Party leader Shaina NC also welcomed the decision of the temple authorities, saying it is a historic day for all women.

"This was never a fight of political ideology. This was for women at par," she said.

Maharashtra Chief Minister Devendra Fadnavis had earlier hailed the temple trust's decision and said discrimination on the basis of caste and gender should be eliminated from the minds of the people keeping with the modern times.

"If we have to progress in this 21st century then it is important that we remove this concept of discrimination of caste and gender from the minds of the people completely," Fadnavis had said.

Bowing to the Bombay High Court order and breaking 400 years of tradition, the temple trust today announced that both men and women will henceforth be allowed to enter the inner sanctum and offer their prayers.

Earlier today, around 100 men were seen storming into the inner sanctum of the holy place, defying the Trust's orders.

On the festive occasion of Gudi Padwa, with hundreds of devotees in line to worship, a mob of men arrived outside the temple and stripped to their undergarments as they barged aside the security to enter the inner sanctum of the temple and pray at the holy site.

The temple had reversed an ancient rule and declared that neither men nor women would be allowed into the area that has an idol placed on a platform.