Narendra Modi's visit to Japan: Why it's a special trip 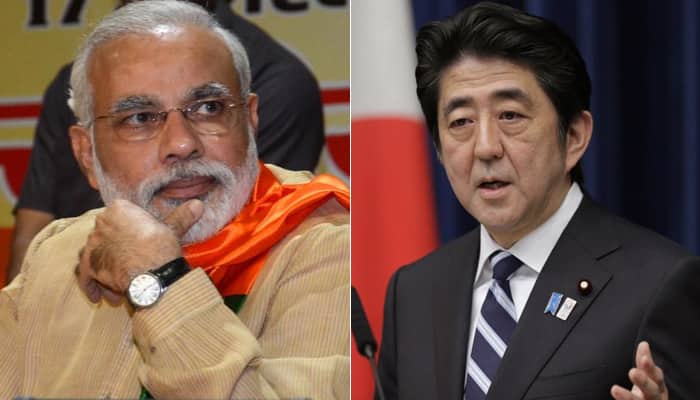 Prime Minister Narendra Modi is set to embark on a five-day visit to Japan, a country that in his words offers “immense scope for cooperation”.

The fact that Modi chose Japan for his first bilateral trip outside the subcontinent is indicative of the importance he imparts to further deepening of relationship between Asia's second and third largest economies.

The Prime Minister reached out directly to the 127 million people of Japan by tweeting in Japanese. "Japan's friendship with India is time tested. We are 2(sic) vibrant democracies committed to advancing peace and democracy in the world," Modi tweeted, yesterday.

"The Japan visit is an opportunity to take our ties to a new level and increase cooperation in various fields," Modi said.

Although both the nations share a historic relationship, Modi's ascendency to power has completely changed the contours of the ties given his long-standing warm relationship with his counterpart Shinzo Abe.

Modi had visited Japan twice when he was Gujarat chief minister and met Abe on both occasions. Both were impressed of the other, leading to the start of a relationship based on mutual admiration.

Modi and Abe's politics also has many common aspects. Both are nationalists, strong leaders who are dedicated to bring their economies back on track of high growth.

In fact one of Modi's tweet was meant for his host Abe, who follows just three people in his Twitter account -- Modi being one of them.

"Am particularly excited to meet PM Abe. I deeply respect his leadership and enjoy a warm relationship with him from previous meetings," Modi said, sending out his personal "konnichiwa" or greetings.

"Have very warm memories of visiting Japan as (Gujarat) CM. The hospitality and the immense scope for cooperation left a deep impression in my mind."

Modi will begin his five-day visit - Aug 30 till Sep 3- from Kyoto, where he will be received by Abe.

The Japanese PM will host a dinner for the visiting dignitary.

Ministry of External Affairs spokesperson Syed Akbaruddin said Kyoto was added to the schedule as it "represents confluence of the civilisational heritage of India and Japan through Buddhism".

"Kyoto is a magnificent example of how a city can maintain its cultural heritage and modernise itself at the same time.”

"It also dovetails how smart cities can be environment-friendly, modernise itself with cutting-edge technology and retain its cultural significance. All these three elements are part of Modi's vision," he added.

Modi would be keen to learn from the Kyoto success as he has big plans to modernise cultural hotspots like Varanasi and Amritsar.

The Tokyo leg of his visit would begin with an official welcome at a ceremony in Akasaka Palace Sep 1.

With building of business ties being on top of the agenda, Modi is, reportedly, taking along a high-level business delegation comprising of who's who of India Inc.

Among those who are reportedly part of the delegation are Mukesh Ambani, Gautam Adani, Dilip Shanghvi, Azim Premji, Chanda Kochhar, S Ramadorai and Kiran Mazumdar Shaw.

Trade between the two countries has steadily increased over the past few years leading to a free trade pact in 2011.

Though Japan remains one of the largest investors in India and has supported big infrastructure projects like the Delhi-Mumbai infrastructure corridor and metro rail, Modi would want to attract more investments, especially in manufacturing.

Japanese companies have invested heavily in China, and if some of this money were to flow into India it would help hasten the pace of economic revival.

One of the biggest items on the talks agenda is a civilian nuclear deal, which has been stuck given Tokyo's concerns on nuclear proliferation. The country has gone through difficult times through its history - atom bombs in World War II to the recent Fukushima disaster.

While it appears implausible that the deal can be finalised during the visit, the warmth in Modi-Abe relationship may help in removing the frost.

India is also keen on going a step further in defence cooperation between the two countries. India wants to buy amphibious search-and-rescue planes for its Navy, any forward movement on the matter will be a success.

The geo-strategic significance of Modi's visit is immense given the growing discomfort in Japan over China's blatant efforts to dominate the region.

Japan, India and the US have been holding joint military exercises in China's backyard but Modi would have to tread a thin line that would see India and Japan deepening their strategic partnership without displeasing Beijing on key concerns.