Prime Minister Narendra Modi held talks with Russian President Vladimir Putin, a day after it was put off as the Russian leader was delayed by his engagements in Brasilia. 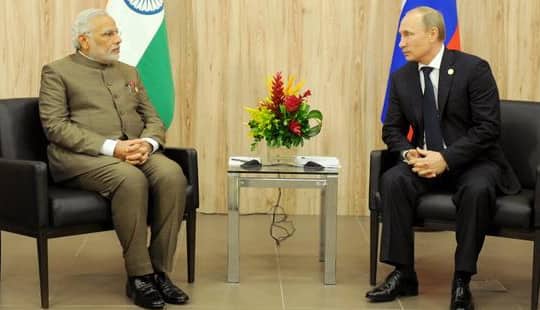 Fortaleza: Prime Minister Narendra Modi on Tuesday night finally held talks with Russian President Vladimir Putin, a day after the meeting was put off as the Russian leader was delayed by his engagements in Brasilia.

Modi was to meet Putin after his meeting with Chinese President Xi Jinping on Monday night but Putin was delayed by his bilateral engagement with host President Dilma Rousseff in the capital.

Speaking in Hindi, the PM said India was excited to host the Russian leader in December.

Talked about strengthening Russia-India ties in my meeting with President Putin.We value our friendship with Russia pic.twitter.com/iOUFo1xmUD

On the sidelines of the BRICS summit here, Modi conveyed his sincere appreciation and admiration for Putin’s decisive leadership in deepening and expanding the India-Russia special and privileged strategic partnership.
The Prime Minister further expressed deep appreciation for Russia’s friendship and unstinting bilateral and international support for India’s economic development and security since the early days of India’s independence.

Modi also reaffirmed that relations with Russia will continue to enjoy the priority that they always had in India’s foreign policy.

Modi, who had also met Putin in 2001 in Moscow, remarked, "Even a child in India, if asked to say who is India`s best friend, will reply it is Russia because Russia has been with India in times of crisis."

The PM added that he looked forward to working with the Russian President to further deepen and broad-base the strategic partnership including in the areas of defence, nuclear energy, space, energy, trade and investment, people-to-people contacts and addressing regional and global challenges.
The two leaders looked forward to their Annual Summit in Delhi in December 2014 as an opportunity to outline a bold vision and roadmap for their relationship in the years ahead.

During his 40-minute meet, the Prime Minister invited President Vladimir Putin to visit Kudankulam atomic power project during his trip.

Putin responded saying "it is a good idea".

Putin congratulated Modi on his great victory in the recent elections.

The Prime Minister said there was a need to look at a liberal visa regime, especially students going for studies.

Putin also acknowledged that the case needed to be looked into, MEA spokesman Syed Akbaruddin said.

Modi fondly recalled his visit to Russia`s Astrakan region in his early days as Chief Minister of Gujarat which has ties with that region. Talking about that visit, he said he felt as if he was in India.

Nuclear power project has been a symbol of India-Russia relations.

Modi appreciated Putin`s speech at the BRICS summit, saying it was clear on issues like reforms of the UN security council and international financial organisations.

After holding talks with Putin here, the PM left for Brasilia to participate in the sixth BRICS Summit with South American countries.

Have contributed towards getting Modi elected as Prime Minister: Vaidik