Google on Wednesday celebrated the birthday of Clara Rockmore, who would have turned 105 today had she been alive, with an interactive doodle on its homepage. 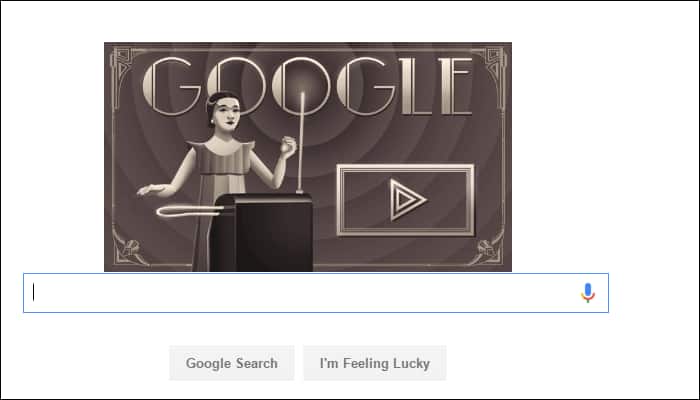 New Delhi: Google has done it again. And, this time it’s for Clara Rockmore, a Lithuanian virtuoso performer of the theremin, an electronic musical instrument.

Google on Wednesday celebrated the birthday of Clara Rockmore, who would have turned 105 today had she been alive, with an interactive doodle on its homepage.

Clara, who was trained from a young age as a violinist, ultimately gave up the violin due to physical strain. This led her to discover the theremin, a gesture-controlled instrument named after its inventor, Léon Theremin.

“Not only did Rockmore become the instrument's most well-known performer, she also influenced its development. She convinced Theremin that it should be made more responsive and offer a greater range of notes (5 octaves instead of 3),” wrote Google in a blog post.

For t today's doodle, the creators tactfully translated the movement used to play the theremin - one hand controlling pitch and the other volume -to an interactive module, where a point of light controls volume and pitch.

The Internet search giant also described Clara as ‘the woman who made music from thin air’.

It is said that she was so good at her instrument and her musical mentor, Léon Theremin, became so enamored with Clara that he proposed to her several times but she refused each time.

In 1933, she married attorney Robert Rockmore, and thereafter used his name professionally. Her maiden name was Reisenberg.

Women outnumber men when it comes to Google Search in India