A forward movement appeared to be in sight on Wednesday in the talks between agitating Gujjars and the Rajasthan government, which is believed to have promised to give a written proposal on the demand for five per cent quota in jobs. 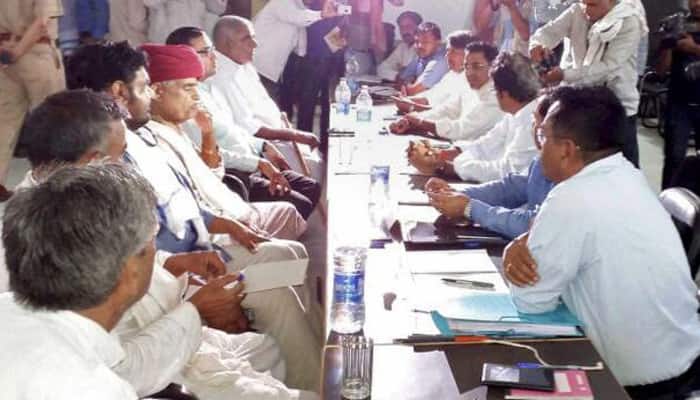 Jaipur: The Rajasthan government on Wednesday expressed its inability to accord five per cent quota to Gujjars in jobs, suggesting that any such move will have adverse consequences on social harmony in the state even as the agitators continued with their protest.

"In principle, we expressed the government's inability to make any change in the current reservation arrangements in view of social harmony.

"The Gujjar delegates said they will discuss it with their people and get back to us soon," Health Minister Rajendra Rathore told reporters after a meeting with a Gujjar delegation.

He hoped that a final round of talks would happen after the Gujjar leaders discuss the matter with their community members.

After the meeting, the Gujjar delegation expressed dissatisfcation over the government's efforts.

"The government gave us a draft highlighting the efforts it had made in the past to ensure reservation for the community but we are not satisfied with that.

"It expressed inability to accord us five per cent reservation in jobs as it may disturb the social harmony," said Himmat Singh, spokesperson of Gujjar Arakshan Sangharh Samiti.

The delegation members also refused to vacate the Delhi- Mumbai railway tracks and highways as was directed by?the High Court today. They said the draft and outcome of the meeting will be discussed with the agitating community members.

"The meeting has failed. We will discuss the outcome with our members at the tracks.

"As far as the issue of vacating the highway and railway tracks is concerned, we will not do that and it is for the state government to take care of the High Court order," Singh said.

Gujjars have been blocking rail tracks and roads in three districts for a week now to press for five per cent quota in government jobs.

Both sides had detailed discussions last night over the issue though there was no conclusive result and the Gujjar delegation and a three-minister panel met again today at the secretariat here for another round of the talks.

Meanwhile, the Delhi-Mumbai rail track in Bharatpur, Agra-Jaipur national highway in Dausa and a state highway in Sawaimadhopur remained blocked today on the seventh day of the agitation.

The agitating Gujjars led by Bainsla held the first round of talks in Bayana of Bharatpur town on Saturday last week which was inconclusive and the second meeting between the two sides was held last night in Jaipur.

The Rajasthan government earlier in the day directed the district administration and police officers in four districts to evacuate Gujjar agitators from railway tracks and highways in compliance of a High Court order.

"The directions were given to Jaipur and Bharatpur range IGs and collectors of Bharatpur, Dausa, Karauli and Sawaimadhopur to clear the blockade and restore highways and rail tracks," state Home Minister Gulabchand Kataria told PTI.