Gujjar community leaders, who continued their protest demanding five percent reservation in government jobs and educational institutions continued for the second day on Friday, "agreed" to hold talks with the Rajasthan government on Saturday. 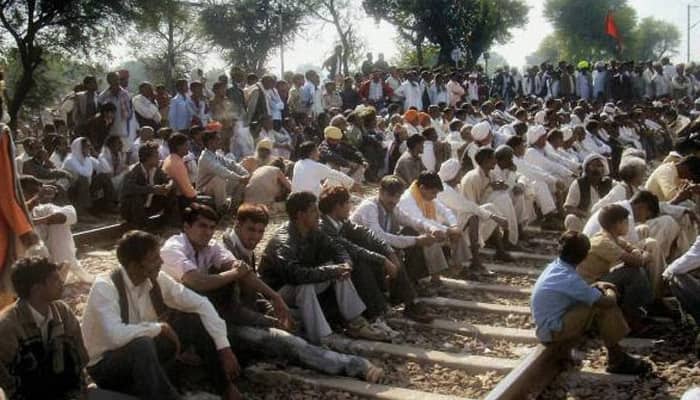 Jaipur: Gujjar community leaders, who continued their protest demanding five percent reservation in government jobs and educational institutions continued for the second day on Friday, "agreed" to hold talks with the Rajasthan government on Saturday.

"We have conveyed to the state government to hold talks on the reservation issue, but talks can be held only in Bayana in Bharatpur district or Pilu Ka Pura near Bayana town where our community members are staging sit-in on railway tracks," Gujjar Arakshan Sangarsh Samiti spokesman Himmat Singh was quoted as saying.

The Samiti, led by Colonel (retd) Kirori Singh Bainsla, is spearheading the agitation.

"We are ready to depute a 25-member delegation for the talks. However, so far we have not heard anything from the government," Singh said.

Gujjars agreed to hold discussion after the state government sent a letter to the community leaders, requesting for holding talks with a cabinet committee.

Meanwhile, rail services continued to be affected as thousands of Gujjars continued to sit on the railway tracks in Bharatpur district. Road traffic was affected too.

The sit-in at Pilu Ka Pura area in the district affected the movement of at least 50 trains, including those on the Delhi-Mumbai section.

The state roadways also cancelled some buses on the route where the Gujjars were holding their protest.

Gujjars in Rajasthan are demanding the reservation under SBC (special backward class) category.

Gujjars, demanding reservation for better educational and job prospects, had staged violent protests between 2006-2008, in which at least 67 people lost their lives.

Vasundhara Raje to flag off Jaipur Metro on Jun 3