Over 3,000 spotted deer and wild boars were found in Bhitarkanika national park in Odisha, according to a survey of mammals, first of its kind to be undertaken in the forest and wetland sites of the park. 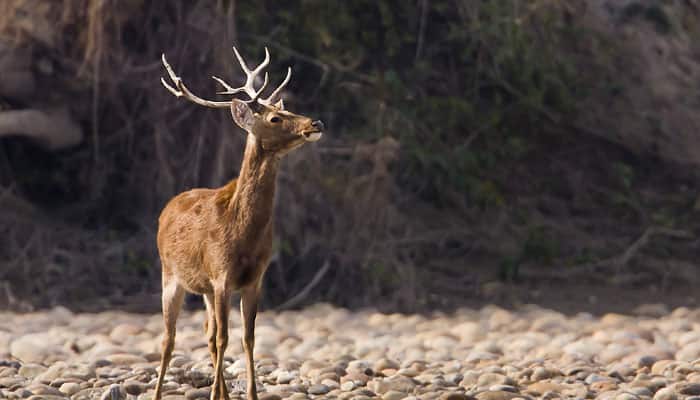 Kendrapara (Odisha): Over 3,000 spotted deer and wild boars were found in Bhitarkanika national park in Odisha, according to a survey of mammals, first of its kind to be undertaken in the forest and wetland sites of the park.

Deer and boars apart, Bhitarkanika is home to nearly 2,000 more mammal species like monkeys, hyenas, jackals and fishing cats, according to the headcount report.

A status survey of these animals is vital for the study of growth pattern of species living within the marshy wetland and mangroves of this Ramsar international wetland site, said officials.

By all indications, their number is on a steady rise because of the conducive environs and availability of plentiful of food reserve in Bhitarkanika. The enumerators are carrying out the headcount on the basis of distinct footmarks of the deer, boar and hyenas, said Swain.

It is widely believed that there is growth of their population every year. Recurring man-animal conflict following the mammals' act of straying into human settlement are indicator of rise in their numbers, said officials.

The animals' numbers are proportionate to their habitation corridors. Factors prompting the animals entering into crop fields and orchards in village areas could also be analysed methodically on the census figures, said the DFO.

From observation made in the past by wildlife staff, every year these mammals are undergoing rise in number. Some actors are contributing to the rising graph. First of all, the rich and lush-green mangrove forest has turned out to be an ideal habitat for hyenas, boars and deer. Lack of human interference in their habitation corridors also favours.

Besides there is imbalance in predator-prey base in Bhitarkanika. Unlike the Sundarbans, Bhitarkanika mangroves are devoid of tigers. Only estuarine crocodiles prey upon these animals, DFO Swain observed.