Elephants can detect rainstorms 240 km away

Elephants are able to detect rain storms from distances as far away as 240 km and move towards them, scientists have found. 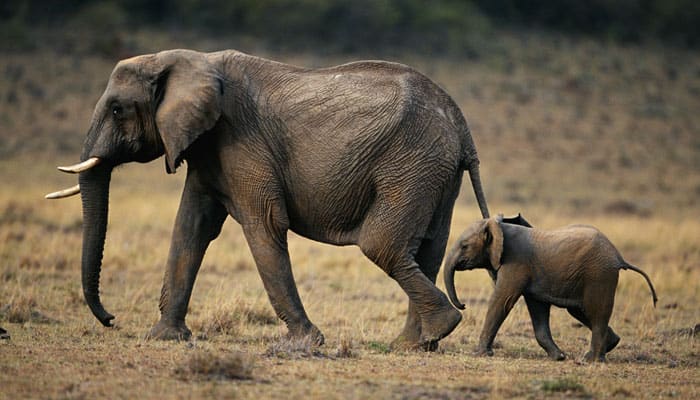 Johannesburg: Elephants are able to detect rain storms from distances as far away as 240 km and move towards them, scientists have found.

Researchers working in Namibia tracked both elephants and rain over the course of several years and found the elephants were clearly able to detect rain events from great distances and move towards them.

Namibia, like much of south-western Africa, is a hot and dry place for most of the year, that is why animals that live there have learned to take advantage of the rainy season that occurs each year from January to March, researchers said.

Elephants are migratory animals, with herds nearly constantly on the move in the search for food and water.

Prior research has found that a herd will sometimes change direction suddenly with no apparent reason.

To find out why, researchers placed GPS tracking devices on 14 elephants, each a member of a different herd moving around in a different part of the area, over the period 2002 to 2009, 'phys.Org' reported.

They also tracked rainfall using weather satellite data. By analysing the data from both sources the team was able to see that the sudden changes in migrating direction were due to attempts by the animals to move in the direction of the falling rain.

What was so surprising was how the elephants were able to move towards storms that were still very far away, sometimes as far away as 240 km, researchers said.

The researchers could not determine how the elephants are able to detect the rainfall, but suspect that they might be able to hear it - either the thunder claps or the rain actually hitting the ground.

Prior research has shown that elephants can hear very low frequency sounds (which can carry for very long distances) and also use them as a means of communication between herd members.

The research is published in the journal PLOS ONE.

Fish fossils give clues to origin of sex