ICRISAT, a member of the Peanut Genome Consortium, today claimed that the International Peanut Genome Initiative (IPGI) has successfully sequenced the genome of the humble peanut. 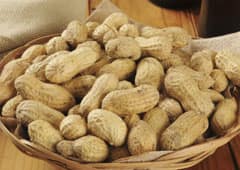 Hyderabad: ICRISAT, a member of the Peanut Genome Consortium, today claimed that the International Peanut Genome Initiative (IPGI) has successfully sequenced the genome of the humble peanut.

City-headquartered ICRISAT is a member of the Peanut Genome Consortium, a multi-national group of crop geneticists working in co-operation for several years in the peanut genome sequencing project.

The new peanut genome sequence will be available to researchers and plant breeders across the globe to aid in the breeding of more productive, more resilient peanut varieties, an ICRISAT statement said.
Peanut (Arachis hypogaea), also called groundnut, is an important crop both commercially and nutritionally.

Globally, farmers tend about 24 million hectares of peanut each year, producing about 40 million tonnes. While the oil and protein rich legume is seen as a cash crop in the developed world, it remains an important sustenance crop in developing nations.

"Rich in protein and edible oil, peanut is central to the financial and nutritional well-being of hundreds of millions of farmers and consumers across the semi-arid tropics of Asia and sub-Saharan Africa," Director General of the International Crops Research Institute for the Semi-Arid Tropics (ICRISAT) William Dar said.
"Improving peanut varieties to be more drought, insect and disease resistant, using the genome sequence, can help farmers in developed nations produce more peanuts with fewer pesticides and other chemicals and help farmers in developing nations feed their families and build more-secure livelihoods," Rajeev Varshney, Research Programme Director ? Grain Legumes and Director, Center of Excellence in Genomics, ICRISAT.