The blast in Kabul apparently targeted the offices of Afghanistan`s main security agency was followed by a heavy firefight. 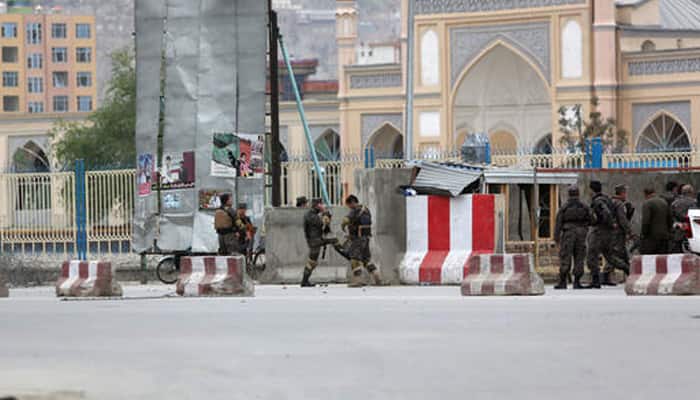 Kabul: At least 28 people were killed and hundreds wounded when a Taliban truck bomb tore through central Kabul on Tuesday.

A fierce firefight ensued the attack, a week after the insurgents launched their annual spring offensive.

The Taliban claimed responsibility for the attack in a densely-crowded neighbourhood, which sent clouds of acrid smoke billowing into the sky and rattled windows several kilometres away.

The brazen assault near the Defence Ministry marks the first major Taliban attack in the Afghan capital since the insurgents announced the start of this year`s fighting season.

"One of the suicide attackers blew up an explosives-laden truck in a public parking lot next to a government building," Kabul police chief Abdul Rahman Rahimi told reporters.

"As a result 28 people were killed, most of them civilians. The second attacker engaged security forces in a gunbattle before being gunned down."

Rahimi said the attack also left 183 people wounded but the Health Ministry said that figure was almost 330, with many battling for their lives in hospital.

The gunfight appeared to die down several hours after the powerful explosion, but some security officials expressed concern that other bombers may still be on the loose.

The Interior Ministry denounced the attack as a "war crime" and pledged to track down the perpetrators.

The Taliban said on their Pashto-language website that they had carried out the suicide bombing on "Department 10", an NDS (National Directorate of Security) unit which is responsible for protecting government ministers and VIPs.

Taliban spokesman Zabihullah Mujahid claimed their fighters had managed to enter the offices of the National Directorate of Security. However, Afghan officials denied that, saying the target of the attack was a government office responsible for providing security to government VIPs.

The Taliban are generally known to exaggerate battlefield claims.

Pitched gunbattles were ongoing near the building, which was cordoned off by security officials as ambulances rushed to the scene. "(We) condemn in the strongest terms the terrorist attack in Puli Mahmood Khan neighbourhood of Kabul, as a result of which many of our countrymen were martyred and wounded," President Ashraf Ghani said in a statement.

"Such cowardly terrorist attacks will not weaken the will and determination of Afghan security forces to fight against terrorism."

A thick plume of black smoke was seen rising from the area near the sprawling US embassy complex immediately after the blast.

Warning sirens blared out for some minutes from the embassy compound, which is also close to the headquarters of the NATO-led Resolute Support mission.

The US embassy and the NATO mission both said they were not affected by the blast.

The Taliban on Tuesday last week announced the start of their "spring offensive" even as the government seeks to bring them back to the negotiating table to end the drawn-out conflict.

The Taliban warned they would "employ large-scale attacks on enemy positions across the country" during the offensive dubbed Operation Omari in honour of the movement`s late founder Mullah Omar, whose death was announced last year.

The insurgents began the fighting season last week by targeting the northern city of Kunduz, which they briefly captured last year in a stunning setback for Afghan forces.

But officials said Afghan security forces drove Taliban fighters back from the city on Friday.

The annual spring offensive normally marks the start of the "fighting season", though this past winter the lull was shorter and rebels continued to battle government forces, albeit with less intensity.

The Taliban`s resurgence has raised serious questions about Afghan forces` capacity to hold their own. An estimated 5,500 troops were killed last year, the worst-ever toll.

Peace talks which began last summer were abruptly halted after it was revealed that Taliban leader Mullah Omar had been dead for two years, a disclosure which sparked infighting in the insurgents` ranks.

A four-country group comprising Afghanistan, the United States, China and Pakistan has been holding meetings since January aimed at jump-starting negotiations, though their efforts have so far been in vain.