Pakistan's 'help' has left the predominately Hindu country shocked as the ready-to-eat food includes packets of 'beef masala'. After a media furore, the Pakistan Prime Ministers' Office issued a absurd clarification that the food consignment was for the non-Hindu community of Nepal and that the advice was written on the labels of the food packets.​ 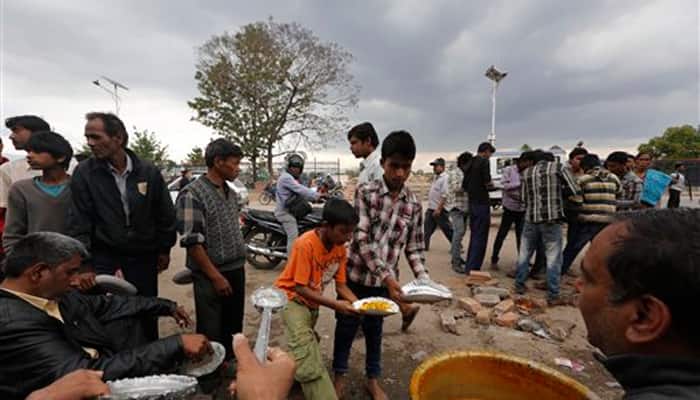 Kathmandu: Lakhs of people in Nepal are hungry and fighting for survival after the devastating earthquake. Aid is pouring in from across the world. Pakistan has also sent aid but the food packets remain untouched. Why?

Pakistan's 'help' has left the predominately Hindu country shocked as the ready-to-eat food includes packets of 'beef masala'. After media furore, the Pakistan Prime Ministers' Office issued an absurd clarification that the food consignment was for the non-Hindu community of Nepal and that the advice was written on the labels of food packets.

Cows are considered sacred in Nepal and there is a strict ban on its slaughter and is punishable with 12 years in prison. Prior to 1990, the offence attracted death penalty. As per 2011 census, 84 percent population of Nepal is Hindu, followed by Buddhists who constitute over 10 percent of the population. Effectively, close to 95 percent population is averse to beef.

While some are calling it insensitive on part of Pakistan to send beef to Nepal, others are seeing a mischief behind the act.

As per a report in Daily Mail, a team of Indian doctors first found out about the contents of the Pakistani aid and alerted the officials.

The report further added that the issue may lead to a diplomatic row between Nepal and Pakistan.

“The matter has been conveyed to Prime Minister Sushil Koirala and the intelligence chief. We are also starting an internal inquiry to verify the facts. If the report is correct, we will raise the matter at the diplomatic level with Pakistan. India, being our key partner, will also be informed of the developments,” the newspaper quoted a Nepalese official as saying.

Earlier, Pakistan Foreign Office had rejected reports that it had dispatched packets of ‘beef masala’ to earthquake-hit Nepal.

Pakistani newspaper The Express Tribune quoted Foreign Office spokesperson Tasnim Aslam as saying that there was no beef content in the ready-to-eat food dispatched by Pakistan to Nepal. She urged the Indian media not to ‘malign’ Pakistan, adding that people of Nepal 'really liked' the food and even requested for more.

The RSS has hit out at Pakistan over the issue and called it highly insensitive, a report said. Yoga guru Baba Ramdev has also raised the issue and doubted Pakistan's intention behind sending beef as aid to a Hindu country like Nepal.

The toll in the devastating earthquake in Nepal crossed 6,000 mark on Thursday, with over 10,000 injured.

The UN said the quake had impacted eight million in 39 districts, of which over two million live in 11 most severely affected districts.