Even as scores of his supporters protested against his sudden arrest, Maldives ex-President Mohamed Nasheed was at the receiving end of police manhandling ahead of his hearing as he was dealt with harshly and dragged into the courtroom. 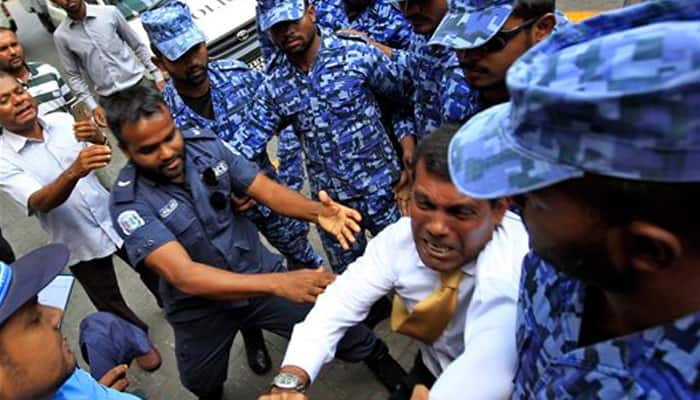 Male: Even as scores of his supporters protested against his sudden arrest, Maldives ex-President Mohamed Nasheed was at the receiving end of police manhandling ahead of his hearing as he was dealt with harshly and dragged into the courtroom, reportedly leaving him injured with a broken arm.

After a brief hearing on Monday, where Nasheed was not even allowed any legal representation, the Criminal Court ordered police to keep President Nasheed in custody until end of his trial.

According to MDP News, the official Twitter account of Nasheed's party (Maldivian Democratic Party), he was “thrown on to the ground, his shirt ripped while a Policemen broke his finger”.

Nasheed reportedly requested the cops to allow him to walk himself in  the court, but brushing off all his pleas, the policemen dragged him forcibly into the courtroom.

Outside the court President Nasheed was thrown on to the ground, his shirt ripped while a Policemen broke this finger pic.twitter.com/2RKbeWBUqz

According to a local news report (Minivan News), Nasheed, visibly injured, was limping in the courtroom and the had used his tie as a makeshift sling for what appeared as a broken arm.

Also, the buttons of his shirt were missing.

Inside the courtroom, Nasheed pleaded to the judge to be taken to a doctor as his arms was broken. But the judge ignored his request and went on with he proceedings.

According to the reports, even after the hearing concluded, Nasheed was not taken to a doctor but straightaway scurried  off on a boat to Dhoonidhoo Island Detention Center.

Maldives' Police arrested Nasheed, leader of opposition Maldivian Democratic Party (MDP) yesterday after the court issued an arrest warrant against him under new charges of terrorism regarding the arrest of a top judge three years ago.

According to reports, Nasheed was arrested because the court suspected that he might not appear for the trial and might flee the country and go into hiding.

Nasheed as President in 2012 had ordered the arrest of Abdulla Mohamed, chief judge of the Criminal Court, after he released an opposition politician detained by the then government.

The current government under Abdul Yameen Gayoom accuses Mr Nasheed of using the military to arrest the top judge when it had no authority to do so. Nasheed is also accused of having detained the judge for weeks without trial or legal counsel and ignoring a Supreme Court order to release him, a government official said reportedly.

Nasheed's arrest has led to protests by the supporters of Nasheed who were shouting anti-government slogans at many places across the capital to demonstrate against the arrest.

Nasheed's arrest also follows weeks of protest against the Government by the opposition alliance (MDP and Jumhooree Party). The opposition parties have alleged that the government has violated the Constitution a number of times.

Meanwhile, the US State Department has expressed concern over Nasheed's arrest.

"We are concerned by reports of the arrest of former President Nasheed this weekend on terrorism charges," the State Department Spokesperson, Jen Psaki, told reporters yesterday.

She informed that the US Assistant Secretary of State for South and Central Asia, Nisha Desai Biswal, spoke to the Maldivian foreign minister and expressed concern.

"She urged the government to take steps to restore confidence in their commitment to democracy, judicial independence, and rule of law, including respect for the right to peaceful protest and respect for due process," Psaki said.

Also, India, Maldives neighbour, expressed concern over the development and "urged all concerned to calm the situation and resolve their differences within the constitutional and legal framework of Maldives".

We are concerned at recent developments in the Maldives including the arrest and manhandling of former President Nasheed.

India reiterates its commitment to supporting people & Government of Maldives in their quest for peace, development, prosperity & democracy.

Violence erupts between Israel and Palestine

Plane Crash: The accident happened due to a technical fault?

Pakistani rupee experiences worst one-day decline in 20 years, plunges to 262 against the dollar

45-year-old Biotech founder tech is spending millions a year to be 18 again. Here's how