Second supermoon of 2014: Gear up for another celestial treat on Friday

Sky enthusiasts can gear up for another celestial treat as the second supermoon of 2014 is coming up this week. 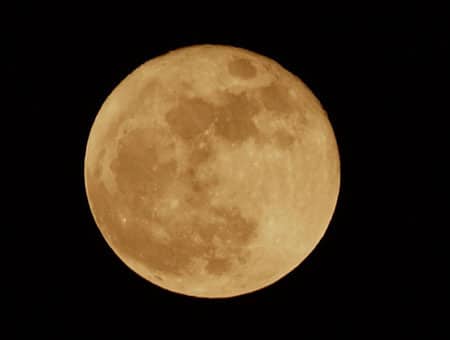 New Delhi: Sky enthusiasts can gear up for another celestial treat as the second supermoon of 2014 is coming up this week.

According to Space Foundation, an organisation working for popularising astronomy, the second of the five supermoons of 2014 would be visible on Friday.
January is the only month with two supermoons until January 2018, the first supermoon of the year 2014 appeared on January 1.

The second supermoon of 2014, which will occur Friday would be visible around 3.30 pm.

While the remaining three supermoons will be visible July 12, August 10 and September 9, the August supermoon would be closest to Earth.

`
A supermoon phenomenon can be seen when the moon makes it closest approach to Earth in its orbit than usual.

According to NASA, because of how close the supermoon is, it can appear as much as 14 percent larger in the sky and 30 percent brighter to our eyes than the normal moons.
The name Supermoon was coined by astrologer Richard Nolle in 1979.The term supermoon is not used within the astronomical community, which use the term perigee-syzygy or perigee full/new moon.

Perigee is the point at which the Moon is closest in its orbit to the Earth, and syzygy is a full or new moon, when the Earth, the Moon and the Sun are aligned. Therefore, a supermoon can be regarded as a combination of the two, although they do not perfectly coincide each time.