There are conflicting reports the St Mark's Coptic Orthodox Cathedral blast was caused by an assailant 'lobbing a bomb' and a woman planting an IED with 6kg of explosives. 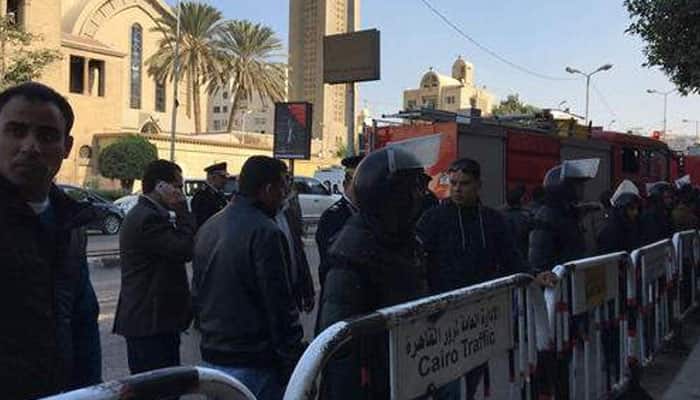 Cairo: At least 22 people were killed and over 30 injured on Sunday in a blast at Cairo's main Coptic Christian cathedral during a mass, the latest attack on minorities suspected to be carried out by jihadists.

The explosion took place at St Mark's Cathedral, main Coptic Christian cathedral, in central Cairo, according to a statement by the Ministry of Health.

According to the Egyptian state TV, 22 people were killed while 35 others injured when a bomb was lobbed into a chapel near the cathedral's outer wall.

The reason of the large number of victims was because the blast took during Christian pray time and there were a large number inside the cathedral, the statement said.

The bomb was remotely exploded.

Most of the victims are women and children, officials said.

The number of casualties may rise.

The incident came two days after six policemen were killed an attack in Cairo on Friday.

St Mark's Cathedral is the seat of Egypt's Orthodox Christian church and is home to the office of its spiritual leader, Pope Tawadros II.

Jihadists in Sinai often target Christians as well as Muslims they accuse of working with the government.

Copts, who make up about 10 per cent of Egypt's population of 90 million, have faced persecution and discrimination that increased during the 30-year rule of Hosni Mubarak, who was toppled by a popular uprising in 2011.

Dozens have been killed in recent years in sectarian attacks and clashes throughout Egypt.