Despite US bombing ISIS, Kobane in Syria could fall to extremists: Dempsey

As US-led coalition forces continue to launch air strikes on Islamic State targets in Iraq and Syria, Turkey has agreed to contribute by allowing US warplanes to use its air bases to attack ISIS, Pentagon Press Secretary Navy Rear Adm. John Kirby said. 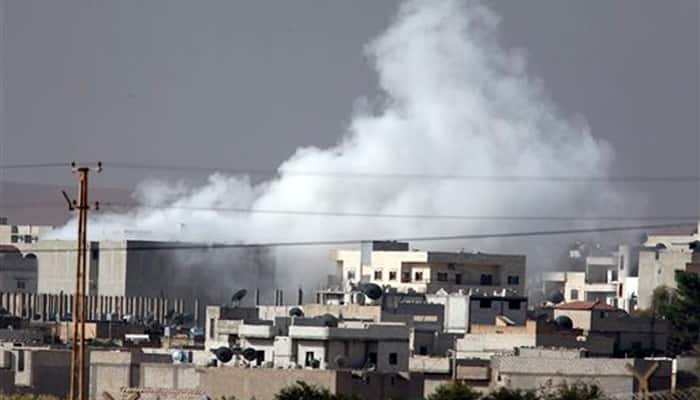 Meanwhile, the chairman of the Joint Chiefs of Staff Martin Dempsey cautioned that Kobani could fall to extremists despite a string of air strikes by the coalition forces. Talking in an interview broadcast on ABC’s “This Week with George Stephanopoulos,” he said, “I am fearful that Kobani will fall”.

Dempsey added that he has “no doubt” ISIL will conduct horrific atrocities if they have the opportunity to do so.

Dempsey justified his warning saying that the Islamic State were making themselves harder to find and identify. “They don't fly flags and move around in large convoys the way they did. … They don't establish headquarters that are visible or identifiable,” he said.

Dempsey noted that "Turkey has forces on the border that will prevent ISIL from making any incursions into their country. “But, of course, ISIL is smart enough not to do that”.

Meanwhile Turkey, which has refused to act militarily in favour of Kurdish fighters against the ISIS, has now agreed to contribute to coalition efforts and will be “hosting and conducting training for Syrian opposition members”.

US Defense Secretary Chuck Hagel on Sunday had a phone discussion with Turkish Defense Minister Ismet Yilmaz over the ISIL threat and “thanked him for aiding in the fight against the Sunni extremists, who have seized vast swathes of land in Iraq and Syria”.

“Hagel noted Turkey's expertise in this area and the responsible manner in which Turkey is handling the other challenges this struggle has placed upon the country, in terms of refugees and border security,” Pentagon's Kirby said in a statement.

Kirby added that Turkey will next week, host a joint US Central Command-European Command planning team next, “as the US military works closely with Turkey to further develop a training regimen”.

Turkey, which has sheltered the refugees from Syria, has so far remained a mute spectator as the ISIS goes on slaughtering people just few kilometres away in Kobani.

The US has been pressing Turkey to do more and act militarily against ISIS to prevent the massacre but Turkey has so far done nothing besides stationing tanks on its border with Syria. Turkey has refused to act militarily in favour of Kurdish fighters as it considers them an extended part of PKK, which they have branded as a terrorist group.

However, not seeming to budge over its earlier stance, Turkish Foreign Minister Mevlut Cavusoglu said it was unrealistic to expect Turkey to lead a ground operation against Islamic State (IS) militants in Syria on its own.

Turkey has also called for creation of a buffer zone over its border with Syria, to which US seems indifferent. France however said it was in agreement to the idea of creating such a zone.

The UK-based monitor informed that the coalition forces carried out five air strikes on ISIS today morning, out of which four struck the extremists in the southern side of Kobane and the 5th one targeted ISIS groupings around the city near Mashta Nour strategic hill, devastating a vehicle for ISIS.

Coalition warplanes went in 5 air strikes this morning 4 of it targeted ISIS groupings in the southern side of... http://t.co/BnWRdHd1i5

Also, ISIS fighters and YPG forces continued to clash in the southern side of Ayn al-Arab "Kobane" with the latter advancing and taking control of two points in the city.

The clashes also led to death of 13 fighters from the IS in addition to seizing heavy weapons , the monitor added.

The SOHR added that some IS militants tried to advance yesterday night towards the Freedom Square located in the center of the city of Kobani, where IS militants are fighting vigorously in order to advance by demoralising YPG men.

Violent clashes had taken place yesterday at the outskirts of the Square leading to the death of some IS militants while others retreated to the eastern neighborhoods in the city of Kobani, the monitor added.

Ever since Islamic State (IS) fighters launched an assault on Syrian border town of Kobani on September 16, Kurdish People's Protection Units (YPG) group has been defending the embattled city.

Women fighters have traditionally been an integral part of Kurdish forces.

Earlier on Oct 5, another Kurdish woman became the first suicide bomber to have blown herself away amidst a pool of IS fighters, killing dozens of them.

Tags:
Ayn al-ArabSyriaTurkeyIslamic state in Iraq and SyriaUS
Next
Story