The barbaric group Islamic State has again come up with a video threatening to behead a French firm employee belonging to Croatia within 48 hours if Egypt did not free all female prisoners. 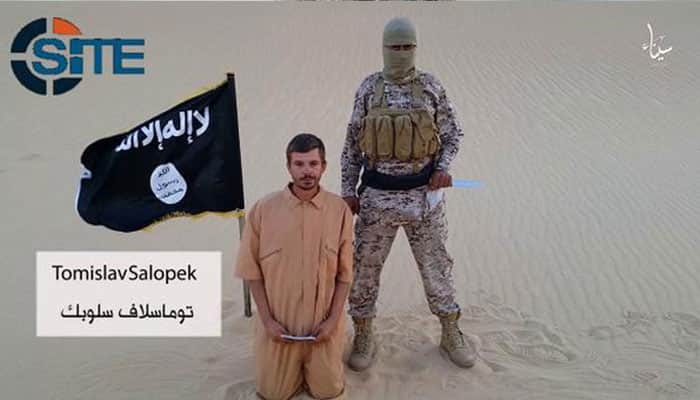 Cairo: The barbaric group Islamic State has again come up with a video threatening to behead a French firm employee belonging to Croatia within 48 hours if Egypt did not free all female prisoners.

It might be noted that Egypt had arrested thousands, many of them females, in the aftermath of 2013 military ouster of ex-President Mohammed Morsi of Muslim Brotherhood.

Terror tracker SITE Intel Group's head Rita Katz tweeted a grab from the video which showed the Croatian man dressed in a faded yellow jumpsuit kneeling before a knife-weilding ISIS fighter in fatigues.

The video that last for over 1 minute is entitled, “A Message to the Egyptian Government".

In the video, the hostage reads from a note, identifying himself as 30-year-old named Tomislav Salopek from Croatia, with a wife and two kids.

The Croation hostage, Tomislav Salopek, said that he works in the Cairo branch of the French geoscience company CGG and was captured on 7/22

The Croatian, who worked as a topographer for a French Geoscience company Compagnie Generale de Geophysique, (GCC), was kidnapped by Sinai Province ISIS fighters on July 22 while heading to work in his company car.

“They want to substitute me with the Muslim womens arrested in Egyptian prisons... This matter have to be achieved before 48 hours from now, if not the soldiers of Wilyat Sina will kill me,' SITE quotes him as saying in the video.

It might be possible that ISIS confused the Croatian for a French citizen, reports the Daily Mail.

US must seize chance to `win trust` of Iranians: Zarif

Aftab confessed in the narco test

Congress party can play big bet in Gujarat, CM will be from 'Thakur' community?