Russian intervention in Ukraine legitimate unlike US war in Iraq: Vladimir Putin

Russian news agencies quoted Presidential spokesperson Dmitry Peskov as saying that the Russian troops were told to pull back. 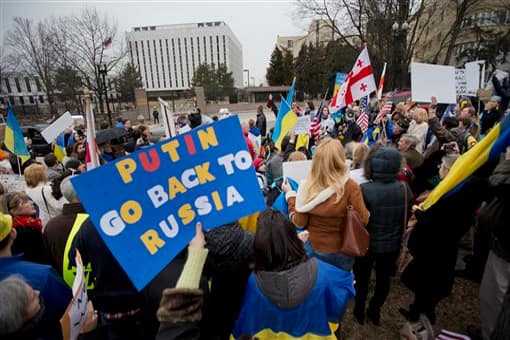 Kiev: Justifying his action in Crimea, Russian President Vladimir Putin on Tuesday said that it was a "humanitarian mission" for Russia to defend the Russians of Ukraine and for that any use of military force would be legitimate and in accordance with the international law.

Addressing a news conference on Ukraine crisis, Putin said that Russia had no intention to go to war with Ukraine and there was no need so far to use military force and it would be used only as a "last resort".

"Even if I decide to use army forces it will be fully legitimate and be in line with international law", Putin said.

Putin further said that Russia had the right to use all legitimate means to protect residents of eastern Ukraine, however he made clear that Russia didn`t need to use military force in Ukraine "äs yet".

Hours after ordering troops on Ukrainian border to return to their bases, Putin addressed a press conference in Russia to discuss the Ukraine crisis.

Further slamming the Western chorus of illegitimacy, Putin questioned the lawfulness of American military operations in Afghanistan, Iraq and Libya.

Putin reasoned that the Russian act was legitimate as Moscow was acting on the behest of Ukraine`s President Viktor Yanukovych, who had asked for help.

Putin further said that the forces in Crimea were not Russian soldiers but the local “pro-Russian self defence forces”.

"Our actions are often described by the West as not legitimate, but look at US operations in Our actions are legitimate from the point of view of international law, because Ukraine`s legitimate president asked us for help," Putin added.

Putin also said that Russia was not considering to invade Crimea and only the people of Crimea had the right to decide their future.

"There will be no war. We are not going to go to war with the Ukrainian people," said Putin.

As Putin spoke, the Russian stock markets that had plunged by about 10 percent due to sanctions rhetoric by the West, showed signs of recovery. The Wall Street Journal reported that Micex Index in Russia gained 5.3% with Putin`s strong words on Ukraine.

Putin also sought to rubbish the threat of economic sanctions being brandished widely by the Western leaders, saying, "all threats against Russia are counterproductive and harmful".

On the threat by G7 nations to isolate Russia, Putin said, "Russia was prepared for the G8 Sochi Summit, but the Western leaders "don`t need to attend" if they do not wish to.

Putin denied to accept the legitimacy of the present government of Ukraine, which he said had seized power forcefully from Viktor Yanukovych.

Putin said that the events in Kiev that resulted in ouster of Yanukovych constituted an "unconstitutional coup". He further added that Yanukovych was the legitimate President of Ukraine and not the new leaders as they had resorted to a forceful seizure of power.

Talking more about Yanukovych, Putin said that he had no political future in Ukraine and that he would have been killed, had Russia not protected him.

Seeking to justify his action to pro-Euro people of Ukraine, Putin said, "I understand the people on the Maidan..Ukrainian people wanted change, but illegal change cannot be encouraged".

Putin added that many nationalists and anti-Semites were rampant in Kiev and because of them Ukraine is in chaos.

As the world powers continued their efforts to thwart Russian aggression in Ukraine, Putin earlier today ordered Russian troops embarked in military exercise on Ukrainian border to return to their bases.

However, Putin said that the military exercise had nothing to do with the situation in Ukraine and he had now ordered the troops back.

Tens of thousands of soldiers were engaged in military exercise on the Ukrainian border, escalating fears that Russia was planning to invade the pro-Russian parts in eastern Ukraine.

However, it was not clear yet if Putin`s call to withdraw troops was a step towards the de-escalation of the crisis, as wanted by the West.

Because, in spite of the order for the troops withdrawal from the border, Russian troops are locked in a stand-off with Ukrainian forces at the Belbek base near Sevastapol in Crimea.

Earlier US had said that Russia had gained fully operation control over Crimea, the autonomous Black Sea peninsula inhabited mostly by Russian-speaking people.

The crucial move came after Russia had been facing unanimous opposition by the major world powers like the US, the UK, the European Nation and its G8 partners.

The G8 nations, who addressed the group as G7 (isolating Russia) also suspended the preparatory talks being held ahead of Sochi Summit in June, which might not happen as scheduled, said John Kerry.

Also, the US Defence Department on late Monday declared the suspension of all military engagements with Russian military in wake of Moscow`s military overtures in Ukraine.

The US also sought to threaten a host of economic sanctions against Moscow, which reflected clearly in the sharp decline of the Russian currency Rouble yesterday.

The diplomatic push by the world powers came as Russia continued to build-up military strength in Crimea, with Russian troops occupying key bases and naval installations.

Churkin also produced a letter signed by Yanukovych to buttress his point.

But the Russian envoy`s statement was met with widespread rejection by the Western leaders, who termed Russia`s claims as groundless.
US Secretary of State John Kerry meanwhile is on his way to Kiev to show US support to Ukraine against Russian aggression.