Unidentified men on Sunday night opened fire at an event in Texas where a contest was being held over Prophet Muhammad cartoons, reports said. 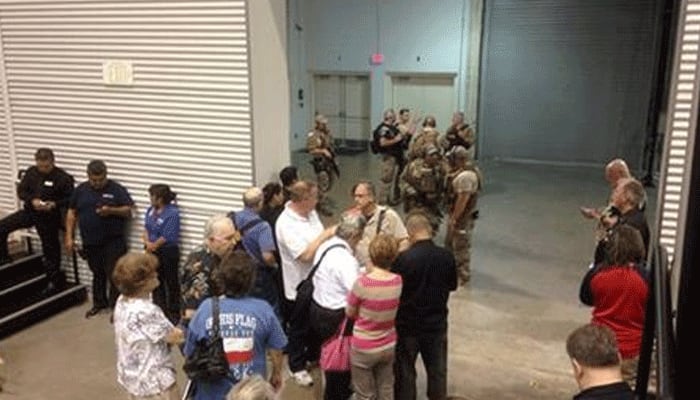 Texas: Police shot dead two unidentified men on Sunday night after they opened fire at an event in Garland, Texas where a contest was being held over exhibition of art and caricatures of Prophet Muhammad, reports said.

The event named “Muhammad Art Exhibit and Cartoon Contest" was underway at Curtis Culwell Centre in Texas city of Garland, when two people came out of their car and started firing in the parking lot, said Garland Mayor Douglas Athas as per a CNN report.

A security guard was shot in leg and rushed to the hospital, the report added.

Meanwhile, people at the event site, Culwell Centre, were evacuated and the bomb squad were searching for any possible explosives hidden at the site.

The event with $10,000 prize for the best cartoon of the Prophet Muhammad, was being held by the American Freedom Defense Initiative, which has reportedly said it was exercising the freedom of expression.

Pamla Genner, who runs the American Freedom Defense Initiative, took to Twitter to report about the incident saying, "This is a war. This is war on free speech. What are we going to do? Are we going to surrender to these monsters?".

Multiple shootings, possible bomb at AFDI/Jihad Watch free speech event in Texas: This is a war. This is war o... http://t.co/eAyMlcowMd

According to one of her retweets, the event attendees resorted to praying and singing the National Anthem as shots were being fired outside.

While in lockdown, audience breaks into song and prayer. National Anthem an God Bless America pic.twitter.com/ufgR8BOOpr

The event held under the American Freedom Defense Initiative was aimed at symbolising the significance of free speech "in response to the outcries and violence over drawings of Muhammad", Pamela Genner said as per a news agency.

The shooting comes four months after gunmen killed 12, including 8 journalists at the office of French satirical magazine Charlie Hebdo which had published Prophet's cartoons.

The attack on Charlie Hebdo magazine in Paris had sparked worldwide concern, triggering a debate over the free speech.

Any form of drawing or art depicting Prophet Muhammad is considered blasphemous in Islam.

In January, 12 people were killed by gunmen in an attack against the Paris office of the satirical newspaper Charlie Hebdo, which had lampooned Islam and other religions and used depictions of Muhammad.