Two former senior Chinese officials subject to graft probes are sick and may not be able to stand trial, sources with ties to the leadership said, possibly sparing the Communist Party the embarrassment of having more of its secrets exposed in public. 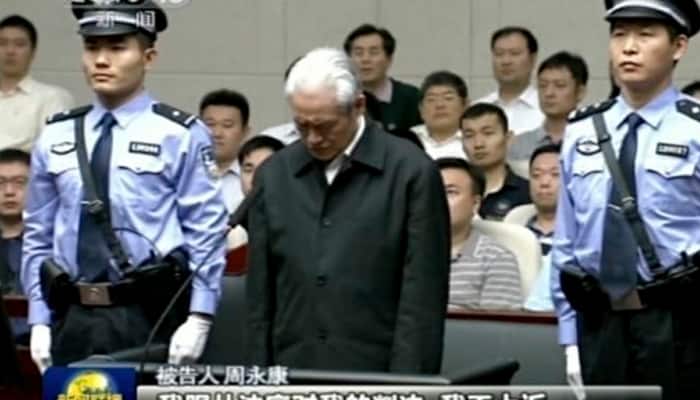 Beijing: Two former senior Chinese officials subject to graft probes are sick and may not be able to stand trial, sources with ties to the leadership said, possibly sparing the Communist Party the embarrassment of having more of its secrets exposed in public.

Since assuming power in late 2012, President Xi Jinping, who doubles as party and military chief, has pursued a relentless campaign against deep-rooted corruption, vowing to go after powerful "tigers" as well as lowly "flies".

The biggest "tiger" snared so far is ex-domestic security chief Zhou Yongkang, 72, who the government said on Thursday had been jailed for life for bribery, leaking state secrets and abuse of power following a closed-door trial last month.

Verdicts on at least two other senior officials linked to Zhou have yet to be announced following their trials - Jiang Jiemin, the former head of CNPC, China`s top energy group, and Li Chuncheng, who was a deputy party boss in the southwestern province of Sichuan where Zhou had his power base.

But two meatier cases may never even make it to trial.

Two sources with ties to the leadership said separately that Ling Jihua, 59, who was a top aide to Xi`s immediate predecessor Hu Jintao, had apparently suffered a nervous breakdown, while Guo Boxiong, a former senior general, was very sick with cancer.

Both cases present dilemmas for Beijing - Ling`s position is particularly sensitive because of his close connection with former President Hu, while the sources said there were concerns in the secrecy-obsessed leadership that if Guo died while under investigation it could ignite rumours he had been murdered.

The ruling Communist Party announced a probe into Ling in December. He had been demoted in September 2012 from a ministerial-level job months after his son was killed in a deadly crash involving a luxury sports car.

"The pressure on Ling has been too great. He has never recovered from losing his son," one source told Reuters, speaking on condition of anonymity. "He is blaming the rest of his family for his downfall."

Ling`s wife and an older brother have also been detained for questioning over corruption allegations.

"Ling Jihua repeatedly shouted the names of his parents for no reason," a second source said.

"Psychiatrists have been brought in to determine whether he is faking it," the source said, adding that the leadership was mulling whether to put him on trial.

PARTY IN A QUANDARY

The government has declined to comment on whether there is a probe into Guo, 73, a former vice-chairman of the decision-making Central Military Commission, but sources have told Reuters an investigation has begun, though not a formal one.

His major general son, Guo Zhenggang, 45, was put under investigation in early March.

The elder Guo`s case follows that of Xu Caihou, who was also a Central Military Commission vice chairman at the same time as Guo, and died of bladder cancer in March. The government said in October that Xu had confessed to taking "massive" bribes in exchange for help in promotions.

"The party is in a quandary because Xu Caihou died of cancer. If Guo is charged and then also dies, people will get suspicious and it will look very bad for the military," the first source said.

The second source agreed that the authorities were worried about the publicity if a prosecution of Guo went ahead.

"If both Guo Boxiong and Xu Caihou died of cancer, it would fuel speculation the government poisoned them," the source said. "If both (former) vice chairmen were corrupt, it would ruin the image of the People`s Liberation Army."

Neither the Defence Ministry nor the party`s graft-fighting Central Commission for Discipline Inspection responded to requests for comment.

It has not been possible to reach Guo or Ling for comment, or their families. Both remain party members.

A government spokesman denied in March that Hu was being implicated in the Ling probe.

But Cheng Li, a senior fellow at the Brookings Institution in Washington and expert on Chinese elite politics, said the case was delicate because of his link to Hu.

"Ling Jihua was a protégé of Hu Jintao and it`s related to factional politics," said Li. "That`s going be very sensitive and Ling Jihua might not cooperate."

US citizen killed fighting for Kurds against Islamic State