Kokrajhar has been decked up ahead of Modi's trip with banners, festoons and big hoardings seemingly omnipresent to "thank" him for the peace accord 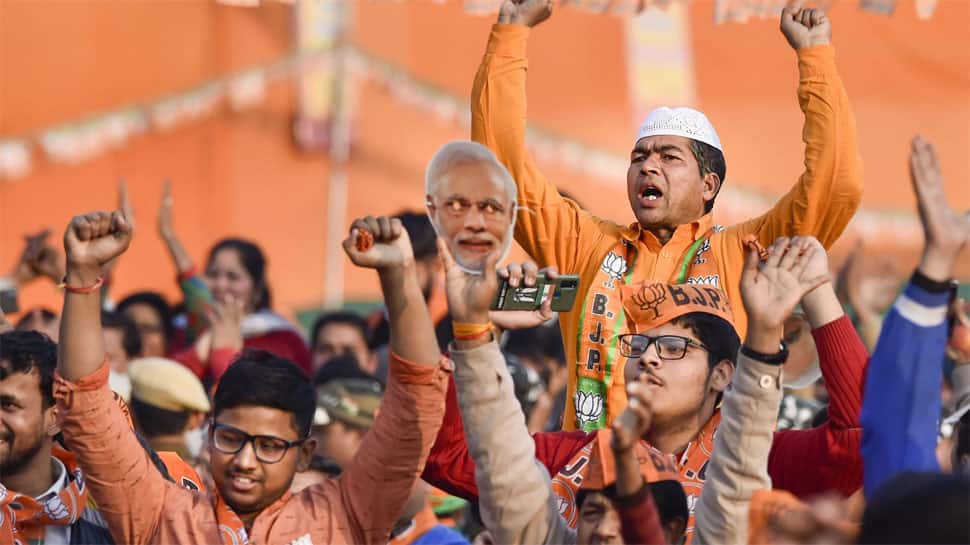 Kokrajhar (Assam): Lakhs of people waving the tricolour on Friday assembled in Assam's Kokrajhar to participate in Prime Minister Narendra Modi's rally to celebrate the recently-signed Bodo peace accord.

Amid stringent security, people have been coming since Thursday night to the rally venue of Jangkritai Fwtar, which is about 216 km from the capital Guwahati.

Around 7,000 volunteers have started receiving people coming via trains and vehicles for Modi's first visit to Assam since the state saw major protests against the Citizenship Amendment Act last December.

Kokrajhar has been decked up ahead of Modi's trip with banners, festoons and big hoardings seemingly omnipresent to "thank" him for the peace accord.

"Conveying sincere thanks on behalf of the people of Assam for your efforts to bring lasting peace through historic Bodo Peace Accord," said hoardings put up by the state government.

On Thursday night, 70,000 earthen lamps were lit to enhance the celebratory mood. The Prime Minister shared the visual on his Instagram handle.

Tomorrow, I’m going to be in #Kokrajhar in #Assam. This great land will host a massive public meeting. People there are very happy on the signing of the Bodo Accord. Citizens have been holding bike rallies, cultural programmes and lighting lamps in the run up to tomorrow’s programme. Thank you Kokrajhar! Do watch tomorrow’s public meeting.

Modi also tweeted calling it a new dawn for Assam. "A new dawn, fresh vigour and renewed hope in Assam! The Bodo Accord will help the youth fulfill their aspirations," he said in the post.

A new dawn, fresh vigour and renewed hope in Assam!

The Bodo Accord will help the youth fulfill their aspirations. https://t.co/GarBiaT7Pm

Chief Minister Sarbananada Sonowal credited Modi's 'persistent efforts' for bringing transformations in the lives of the people of the state.

"Respected Modi ji, the campaign & persistent efforts that you initiated to realise for Assam are bringing these transformations. People of Assam express their gratitude," Sonowal tweeted.

The state government earlier said it was expecting around four to five lakh people from the four Bodoland Territorial Area Districts (BTAD) - Kokrajhar, Udalguri, Chirang and Baksa - and other regions.

Security has been stepped up across Assam and an alert sounded in the wake of the discovery of two improvised explosive devices (IEDs) in Guwahati on Wednesday. To ensure a large attendance, Sonowal's government has declared a public holiday in the four districts on Friday.

On January 27, the Centre and the Assam government inked a peace agreement with representatives of Bodo organisations, attempting to put an end to the decades-old Bodo insurgency based on the demand for carving out a separate state.

The tripartite agreement announced by Union Home Minister Amit Shah provides for the economic and political development of Bodos without affecting the territorial integrity of Assam.

The accord is the third Bodo peace agreement to be signed since 1993. The demand for a separate Bodoland is almost five decades old.

As part of the accord, altogether 1,615 cadres of the three factions of separatist organisation National Democratic Front of Bodoland laid down their arms before Chief Minister Sonowal last Thursday. They deposited 178 arms and 4,893 pieces of ammunition.

People's love and support will protect me: Modi in Assam on Rahul's 'danda' remark