India will need to win the encounter in order to proceed to the next round while a draw will be enough for the hosts to qualify with better goal difference. 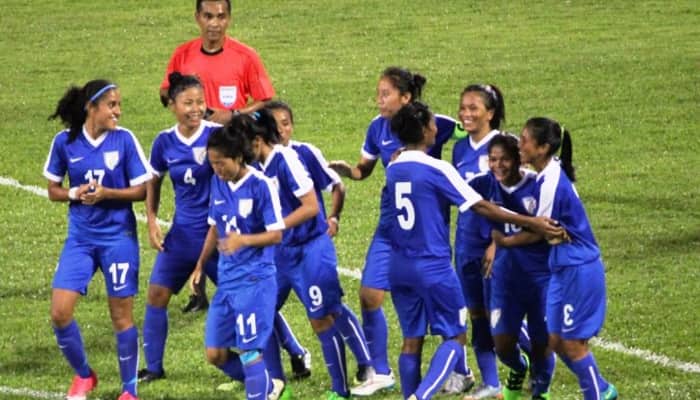 Mandala: The Indian women's football team will have to come out all guns blazing against a formidable Myanmar side in a must-win final round-robin game of the 2020 Olympic Qualifying tournament, here Tuesday.

India will need to win the encounter in order to proceed to the next round while a draw will be enough for the hosts to qualify with better goal difference.

Currently, both India and Myanmar are on six points from two games but Myanmar enjoy a better goal difference of (+8) compared to India (+4). India beat Indonesia 2-0 in the opening game followed by 3-1 win against Nepal.

However India will miss the services of their dependable first goalkeeper Aditi Chauhan, who is out with injury.

"When I was appointed the head coach of the senior team, I knew the challenges we faced. I knew things needed to be changed and the first change was to bring down the average age of team. That could only have been done by focusing on the youth, aiming to create a squad for the future which can be the mainstay of the National Team for years to come," Maymol Rocky said on the eve of the match.

"When I look back and realise the average age of this squad is 21, I pinch myself often. Is it real? Or is it a daydream? The bunch of 20 girls stays just one win away from creating history. The batch has grown drastically ? not only as players but most importantly as human beings."

Rocky is happy that her young team has peaked at the right time and has the ability to beat Myanmar in their own den.

"In the 14 International matches that these girls have played in the span of 3 months, each one of them has displayed that they are capable of greatness. We won the SAFF Championship in Nepal against Nepal in the finals in an intimidating environment where the crowd was booing us with every touch of the ball we had."

"To expect girls some of whom are barely 20 to play the way we did, might be overreaching, but they did it. They proved that age is just a number," an elated Rocky said.