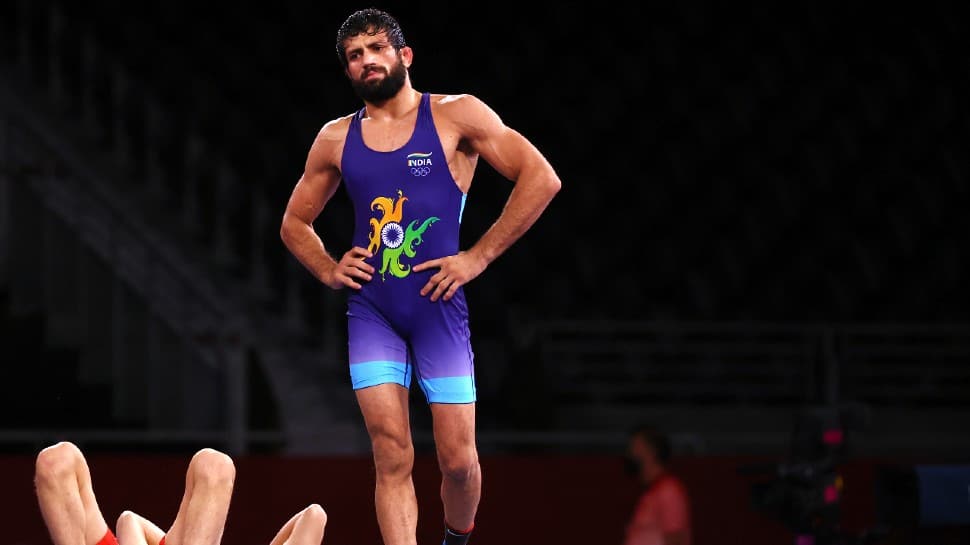 Indian wrestler Ravi Dahiya had to settle for silver as he went down 7-4 to Russia's Zavur Uguev in the 57kg category final at the Tokyo Olympics on Thursday (August 5). Dahiya emulated Olympian Sushil Kumar, who had last won the wrestling silver medal at the 2012 London Olympic Games.

The No. 2 seed Russia Uguev had the upper hand after the first period, winning it 4-2. Uguev, the 2018 and 2019 world champion, has won 25 international matches in a row.

There were expectations that the 23-year Dahiya would become India's youngest Olympic champion but the Russian defended well to win comfortably. Dahiya had lost to Uguev at the 2019 World Championship also.

The wrestler from Nahri village in Haryana had outclassed Colombia's Tigreros Urbano (13-2) in his opener and then outwitted Bulgaria's Georgi Valentinov Vangelov (14-4) in the quarterfinals.

Before Dahiya, who is son of a Haryana farmer, Sushil Kumar was the only Indian to make the gold medal bout at the 2012 London Games but had to settle for a silver. The fourth seed Indian had trailed 2-9 in the semifinal after Nurislam Sanayev of Kazakhstan effected a few ‘fitley’ (leg lace) but as the clocked ticked away, Dahiya regrouped and got hold of his rival with a double leg attack that resulted in a 'victory by fall'.

He got hold of Sanayev with a double leg attack and then gripped him tightly, Kazakhstan wrestler's back on the mat and finished the bout with a might ‘pin’. Even in his previous bouts Dahiya was dominant as the 23-year won both his previous contests on technical superiority en route the final.

Dahiya outclassed Colombia’s Tigreros Urbano (13-2) in his opener and then outwitted Bulgaria’s Georgi Valentinov Vangelov (14-4). He is now only the fifth Indian wrestler to have won an Olympic medal after KD Jadhav, Sushil Kumar, Yogeshwar Dutt and Sakshi Malik.

Jadhav had become India’s first wrestler and also the first individual Olympic medallist when he won a bronze during the 1952 Helsinki Games. After that, Sushil Kumar enhanced wrestling’s profile by winning a bronze at the 2008 Beijing Games and bettered the colour of the medal by claiming a historic silver in 2012 at the London Games that made him India's only athlete with two individual Olympic medals.

The feat since then has now been matched by shuttler PV Sindhu.

EXCLUSIVE: PR Sreejesh slams critics after Tokyo heroics, says 'this is the answer for questioning us in 2012'