Calling it an "iconic friendship", Karisma asked fans to guess the film while wishing them on the day.

New Delhi: Nostalgia is sure to hit you and send you down the memory lane with Karisma Kapoor's take on World Friendship Day!

For long, people believed that a girl and a boy can never be 'just friends' and challenging the belief was cinema which made audiences believe that even opposite sexes can forge the bond!

And reminiscing the same is Karisma who picked out a still from her 1997 film 'Dil Toh Pagal Hai' where she (Naina) is seen sitting with her on-screen best friend Rahul (Shah Rukh Khan).

Calling it an "iconic friendship", Karisma asked fans to guess the film while wishing them on the day.

"An iconic friendship in Indian Cinema #rahul#nisha Any guesses which film ? Happy friendship day everyone !" she wrote on the picture-sharing platform. 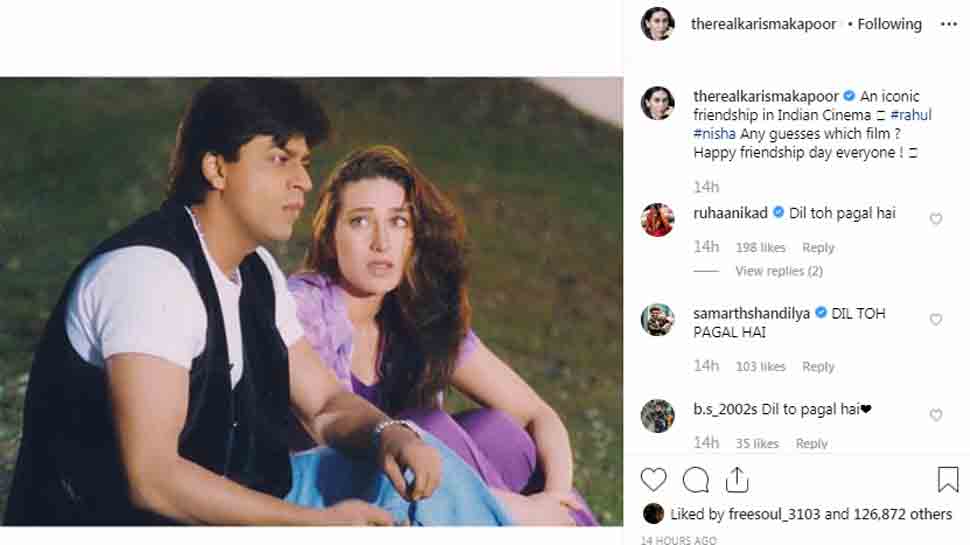 And no surprise to it, fans got the answer right!

The film saw Shah Rukh and Karisma as childhood best friends who are part of a dance group, although the latter develops feelings for her buddy. On the contrary, Shah Rukh falls in love with Pooja, also a dancer, played by Madhuri Dixit.

And as the world is commemorating the day and honouring their bestest buddies, people from the film fraternity also remembered their friends and wished their fans.

With Sonakshi Sinha sharing a message of wisdom on the day, Alia Bhatt urged everyone to "co-exist".