This pic of Arjun Kapoor, Janhvi, Khushi and Anshula is worth a freeze-frame

"Missing," Janhvi Kapoor commented on the post to which Anshula wrote, "Same. Come back, na." Meanwhile, Khushi in the comments section posted, "Love you." 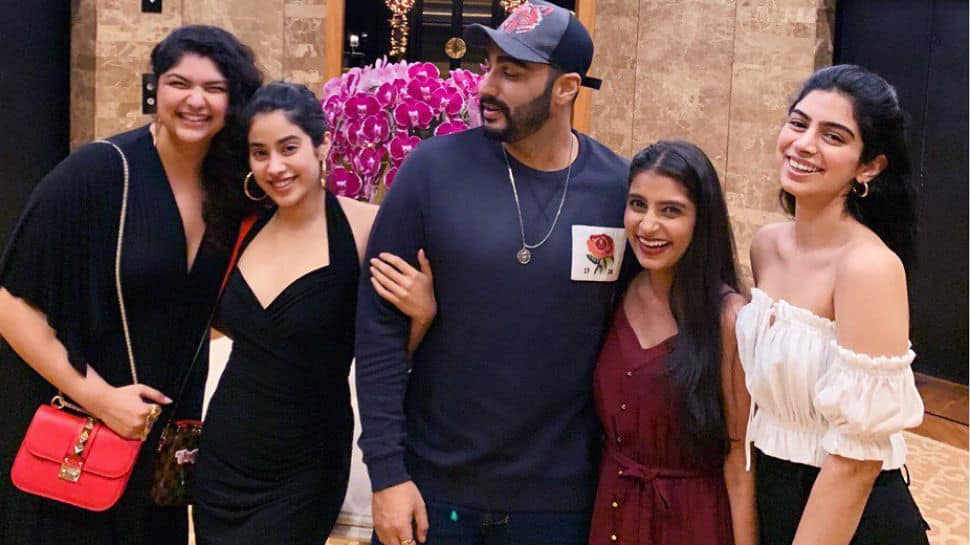 The Kapoor siblings - Arjun, Anshula, Janhvi and Khushi - are in different parts of the world and are clearly missing each other. Anshula's recent post is proof. She shared a heartwarming picture of herself with Arjun, Janhvi and Khushi and described it by just adding a heart emoji.

The family portrait was taken some months ago during one of their trips with father Boney Kapoor and all it speaks about is love.

Arjun is sandwiched between his sisters and a friend. Janhvi looks stunning in a black halter-neck outfit and she holds Arjun from one side. Khushi makes a chic style statement in a white off-shoulder top and black pants and Anshula looks lovely in black.

"Missing," Janhvi commented on the post to which Anshula wrote, "Same. Come back, na." Meanwhile, Khushi in the comments section posted, "Love you."

Janhvi is currently out of India due to her work commitments and so is Arjun. He is busy attending the Indian Film Festival in Melbourne with girlfriend Malaika Arora and other B-Town colleagues.

Janhvi and Khushi are Boney Kapoor's children with late actress Sridevi. He was previously married to Mona Shourie, with whom he has Arjun and Anshula. Mona died in 2012.

On the work front, Arjun, last seen in 'India's Most Wanted', has 'Sandeep Aur Pinky Faraar' and 'Panipat' in the pipeline. Janhvi, on the other hand, is shooting for 'RoohiAfza' and has Gunjan Saxena biopic and 'Takht' in her kitty.