A total of 23 people were killed and 18 injured in the explosions that took place on Wednesday evening. 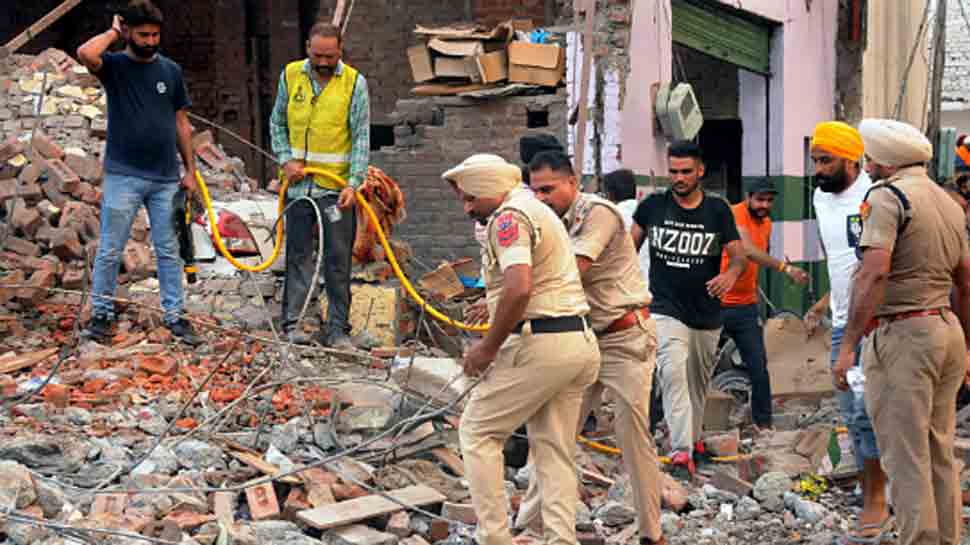 Chandigarh: The firecracker manufacturing unit in a densely populated residential area in Punjab`s Gurdaspur district where a fire claimed 23 lives was running illegally and its licence to manufacture crackers had expired in 2013, Senior Superintendent of Police Upinderjit Singh Ghumman said on Thursday.

"We didn`t know about the (operation of the) factory. The licence of the factory expired in 2013," he told a news channel at the disaster spot.

"We can`t say anything. We can only say after the magisterial probe," he said.

Admitting that there were lapses on the part of the administration that led to the disaster, Deputy Commissioner Vipul Ujwal, who is authorised to issue a licence to the cracker manufacturing units, said the magisterial probe would reveal the names of erring officials.

Seven members of Matu's family, comprising three out of four brothers, died in the blast.

A total of 23 people were killed and 18 injured in the explosions. Rescuers ended their search of survivors a day after buildings were badly damaged in explosions following a blaze at the unauthorised firecracker manufacturing unit on Wednesday.

A school is located close to the disaster spot.

Scattered shoes, broken glass panes and vehicles were seen all over the accident spot as security personnel and rescuers were sifting through the rubble in search of survivors.

Local Member of Parliament Sunny Deol visited the Civil Hospital to enquire about the injured.

Seven grievously injured were referred to the Guru Nanak Hospital in Amritsar.

A number of nearby buildings, including a car workshop, were badly damaged in the explosion. An elderly woman and her grandchild, who were passing close to the disaster spot, were among the dead.

The cause of the blast, which damaged the buildings in a radius of up to 200 metres, is yet to be ascertained, police said.

Cabinet Minister Sukhjinder Singh Randhawa, who reached the accident spot on Wednesday, announced a compensation of Rs 2 lakh to the next of kin of the dead and Rs 50,000 for the injured.

The government has ordered a magisterial probe into the incident.

Locals complained the firecracker unit was running illegally for the past many years. It was manufacturing and storing crackers for the wedding anniversary celebrations of Sikhism`s founder Guru Nanak Dev, popularly known as `Babe da Viah`.

"The firecracker factory has been working in this locality for many years. We have complained against the factory seven-eight times to the local administration, but no action has been taken against it," a local resident told the media.

He said a similar blast occurred in this area in January 2017, leaving two persons dead.

A large number of family members of victims raised slogans against the state government over its failure to check the operation of unauthorized factory in the residential area.

"Still there are a large number of illegal firecrackers units working in the area,a he added.After the blast, police raided three cracker manufacturing units in the town and its nearby areas and sealed them.