Navjot Singh Sidhu and Chief Minister Amarinder Singh had a 'cordial' meet at the Punjab Bhawan on Friday, ahead of Sidhu's coronation as state Congress chief. 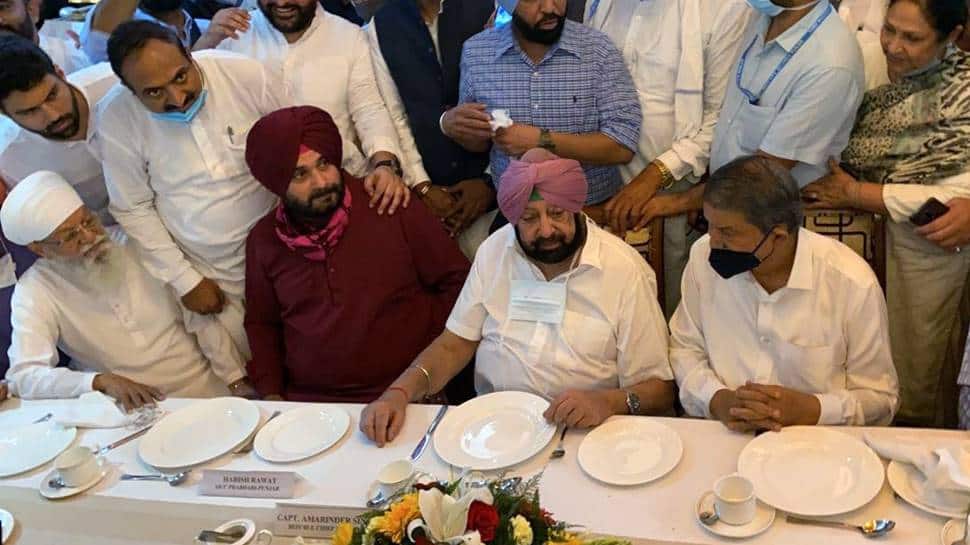 Chandigarh: Navjot Singh Sidhu assumes charge as Punjab Congress president in presence of Chief Minister Amarinder Singh on Friday (July 23). Sidhu and Singh have been at loggerheads with each other for some time.

Just hours ahead of taking charge of the state Congress chief, Sidhu met CM Singh at the Punjab Bhawan. The meeting between Sidhu and Singh was "cordial", as per a Congress leader, PTI reported.

Speaking to reporters outside the Punjab Bhawan, Congress MLA Pargat Singh said Sidhu met the chief minister over tea in the presence of AICC in-charge of Punjab affairs Harish Rawat. The two leaders sat next to each other and the meeting between them was cordial, he added.

Senior Congress leaders Manish Tewari, Partap Singh Bajwa and Lal Singh were also present. This was the first time in nearly four months that Sidhu and Singh met each other.

The chief minister's media adviser tweeted pictures of the two leaders having a chat. The Congress leaders will head to another venue where Sidhu will assume charge as the party's new state unit chief.

Four working presidents of the Punjab Congress will also assume charge at the ceremony at the party's state headquarters here. Singh, who reached here from his farmhouse in Siswan, had invited party leaders for tea at the Punjab Bhawan.

Ministers, Congress MLAs and other senior party leaders were also present at the Punjab Bhawan.

Kuljit Singh Nagra and Sangat Singh Gilzian, two of the four newly-appointed working presidents of the state Congress, had on Thursday extended a formal invite to the chief minister at his farmhouse in Mohali's Siswan for the installation ceremony. The invitation letter was signed by over 55 legislators.

In an apparent bid to bury the differences with the chief minister, Sidhu had separately requested Singh to come for the installation ceremony and said he had "no personal agenda".

Sidhu and Singh have been at loggerheads for some time, with the Amritsar (East) MLA recently attacking the chief minister over desecration cases.

Singh had earlier opposed Sidhu's appointment as the state Congress chief and said he would not meet him until the cricketer-turned-politician apologised for his "derogatory" tweets against him.

On Thursday, after the Congress leaders met the chief minister, the latter's media adviser had tweeted, "Punjab CM @capt_amarinder has invited all @INCPunjab MLAs, MPs and senior party functionaries at Punjab Bhawan for tea at 10 am on Friday. They will all then go to Punjab Congress Bhawan together from there for the installation of the new PPCC team."

Congress president Sonia Gandhi appointed Sidhu as the new president of the party's Punjab unit on Sunday, notwithstanding the strong opposition from Singh.

On Wednesday, several legislators backing Sidhu had said there was no need for him to tender an apology to the chief minister.

Tensions between Singh and Sidhu flared up in April after the Punjab and Haryana High Court quashed a probe report into the 2015 Kotkapura police firing incident.

Sidhu attacked the chief minister through his tweets over the issue of alleged delay in justice in the 2015 sacrilege and subsequent police-firing incidents.

The Amritsar legislator had resigned as a state minister in 2019 after he was divested of his local bodies portfolio.

Sidhu had switched sides from the Bharatiya Janata Party (BJP) to the Congress before the 2017 state Assembly polls.