As per the current seat-sharing formula, the BJP fields its candidates on three of the 13 parliamentary and 23 of 117 Assembly seats. 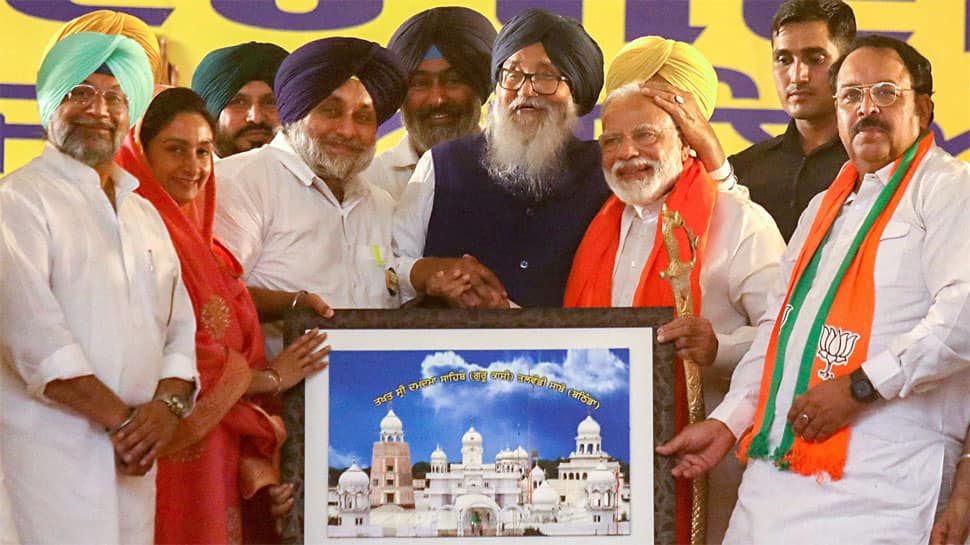 PM Modi is presented with a memento in the presence of SAD patron and former Punjab CM Parkash Singh Badal and other SAD leaders, during an election campaign rally in 2019. (PTI photo)
Share:
Written By:

At a meeting attended by district office bearers of Punjab BJP, the state leadership expressed the desire to contest the elections separately from the Shiromani Akali Dal (SAD) and asked all district officers to start preparing for all 117 Assembly seats.

As per the current seat-sharing formula, the BJP fields its candidates on three of the 13 parliamentary and 23 of 117 Assembly seats. SAD candidates contest from the remaining seats. In the Lok Sabha 2019 election, the BJP won two of the three seats it contested in the state. It bagged Gurdaspur and Hoshiarpur Lok Sabha seats while losing from Amritsar.

In the meeting, the state leader cited Haryana's example, where the BJP contested and won all the 10 seats in the recently-concluded LS poll. Encourage by the performance, the saffron party is now preping to contest the state Assembly elections, scheduled to be held later this year, alone.

Longtime ally of the Bharatiya Janata Party (BJP), SAD managed to win only two Lok Sabha seats this time – Ferozepur and Bathinda constituencies.  SAD's Harsimrat Kaur Badal, who won from Bathinda, took oath as a Union cabinet minister at the Rashtrapati Bhavan on Thursday. The other seat was won by Sukhbir Singh Badal, her husband and party president. Despite fielding old warhorses from several constituencies, SAD contestants fared badly.  Led by Chief Minister Amarinder Singh, Congress won eight out the 13 Lok Sabha seats in the state.

Minor raped, accused beaten to death by mob in Jalandhar