Ajay Devgn recently started shooting for 'RRR' and met his co-stars Ram Charan and Jr NTR on the sets of the film. 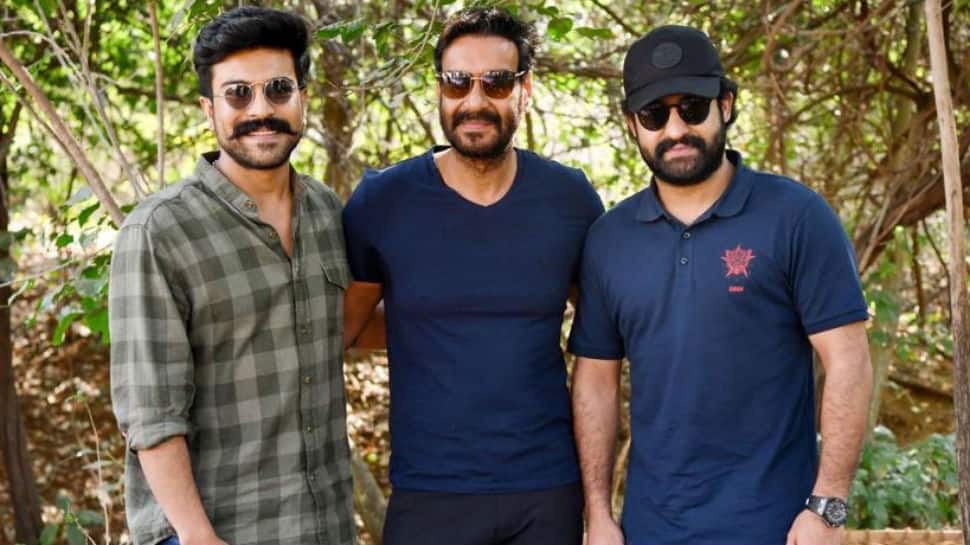 New Delhi: 2020 started on a great note for actor Ajay Devgn. He is currently basking in the success of 'Tanhaji: The Unsung Warrior' and has two major films on the block - 'Maidaan' and 'RRR'. 'Maidaan' is a film based on the golden years of Indian football and Ajay Devgn plays the role of the legendary coach Syed Abdul Rahim, who is said to be the founding father of Indian football and 'RRR' marks his debut in Telugu cinema. Apart from Ajay, the film also has two other superstars - Ram Charan and Jr NTR - and do you know who is directing it? It's none other than SS Rajamouli of 'Baahubali' fame.

Ajay recently started shooting for 'RRR' and met his co-stars Ram Charan and Jr NTR on the sets. A picture, welcoming the 50-year-old actor on board, was shared by Jr NTR on Twitter and no need to guess that it went crazy viral.

"Delighted to welcome you to the world of 'RRR', dear Ajay Devgn sir," Jr NTR simply captioned the post, much to the delight of their fans. Rajamouli also shares the frame with the trio in the photo.

A picture of the three stars was also shared from the official handle of 'RRR' and the caption read, "The stars are shining bright on the sets of 'RRR'!"

Delighted to welcome you to the world of #RRR dear @ajaydevgn sir pic.twitter.com/9iKRJl11e5

The stars are shining bright on the sets of #RRR! @ajaydevgn ji, @tarak9999, #RamCharan & @ssrajamouli from the shoot! #RRRMovie pic.twitter.com/GAOy8Ohb3s

Jr NTR's post has been retweeted over 98,000 times and the comments like "picture of the day" and "perfect, waiting for the film" have been posted in plenty.

'RRR' is Rajamouli's first film after the blockbuster 'Baahubali' series. It is a fictional story set in the pre-independent era (1920) and based on the lives of well-known revolutionaries Alluri Sitarama Raju and Komaram Bheem. Jr NTR will be seen as Komaram Bheem while Ram Charan will be playing Alluri Sitharama Raju.