The KELT-9b planet was found using one of the two telescopes called KELT, or Kilodegree Extremely Little Telescope. 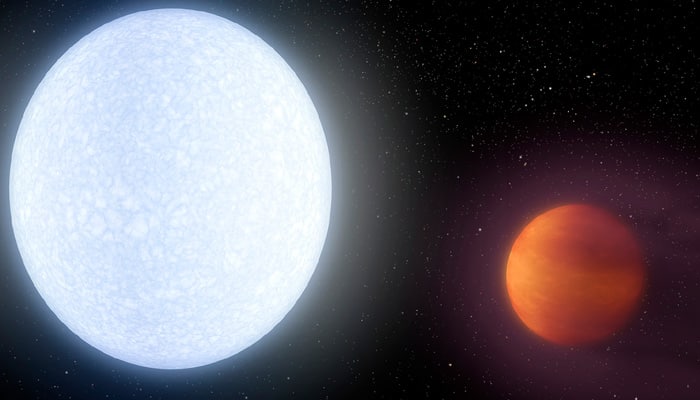 New Delhi: Astronomers have discovered a giant exoplanet planet, a Jupiter-like world, that is hotter than most stars.

The KELT-9b planet was found using one of the two telescopes called KELT, or Kilodegree Extremely Little Telescope.

With a dayside temperature of more than 7,800 degrees Fahrenheit (4,600 Kelvin), the planet, KELT-9b, is hotter than most stars. But its blue A-type star, called KELT-9, is even hotter - in fact, it is probably unraveling the planet through evaporation.

"This is the hottest gas giant planet that has ever been discovered," said Scott Gaudi, astronomy professor at The Ohio State University in Columbus, who led a study on the topic.

Scientists say KELT-9b is 2.8 times more massive than Jupiter, but only half as dense.

Because the planet is tidally locked to its star - as the moon is to Earth - one side of the planet is always facing toward the star, and one side is in perpetual darkness.

Therefore, molecules such as water, carbon dioxide and methane can’t form on the dayside because it is bombarded by too much ultraviolet radiation. However, the properties of the nightside are still mysterious.

“It’s a planet by any of the typical definitions of mass, but its atmosphere is almost certainly unlike any other planet we’ve ever seen just because of the temperature of its dayside,” Gaudi said.

The KELT-9 star, which is only 300 million years old, is young in star time. It is more than twice as large, and nearly twice as hot, as our sun.

“KELT-9 radiates so much ultraviolet radiation that it may completely evaporate the planet," said Keivan Stassun, a professor of physics and astronomy at Vanderbilt University, Nashville, Tennessee, who directed the study with Gaudi.

“KELT-9 will swell to become a red giant star in a few hundred million years,” said Stassun. “The long-term prospects for life, or real estate for that matter, on KELT-9b are not looking good.”

Althogh KELT-9b is nowhere close to habitable, there’s a good reason to study worlds that are unlivable in the extreme, said Gaudi.

Astronomers hope to take a closer look at KELT-9b with other telescopes– including NASA's Spitzer and Hubble space telescopes, and eventually the James Webb Space Telescope, which is scheduled to launch in 2018.

The discovery of the unusual planet has been described in the journal Nature and at a presentation at the American Astronomical Society summer meeting this week in Austin, Texas.